I stumbled across this oddity on eBay tonight. It is a menu from a restaurant called the Boston Corbett Supper Club. 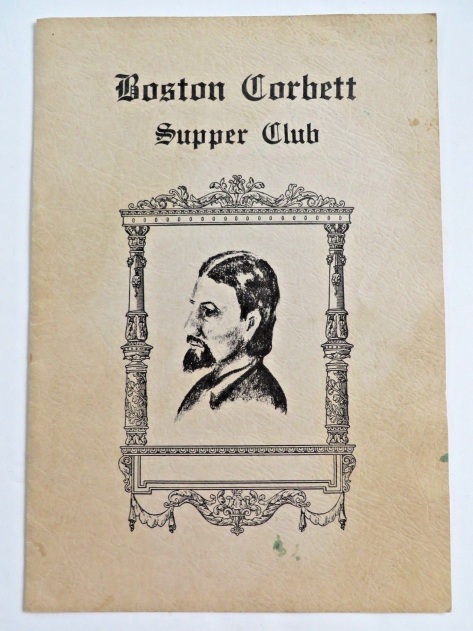 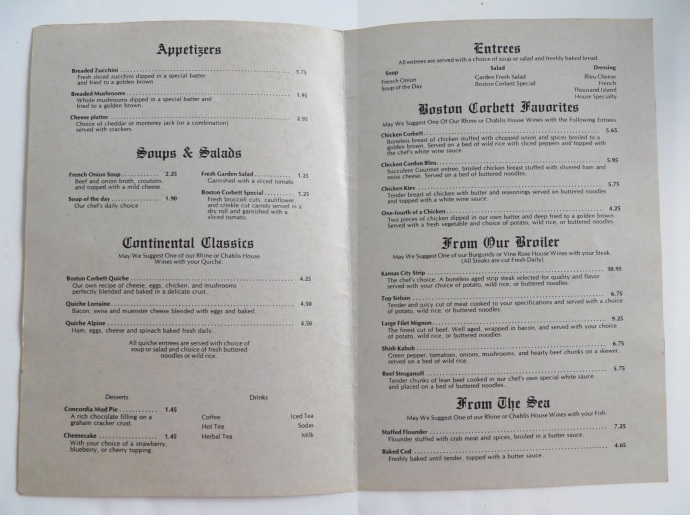 The menu features a drawing of the avenger of Lincoln on the front and, on the inside, a few of the menu items are named after the famous sergeant from the 16th NY Cavalry. Corbett’s honorary dishes include a salad called the Boston Corbett Special containing a variety of cut vegetables, perhaps alluding to Corbett’s expertise with sharp blades. The Boston Corbett Quiche is “baked in a delicate crust” not unlike Corbett’s delicate mind. And under the heading of “Boston Corbett Favorites” is what must be the sergeant’s signature dish, Chicken Corbett, which is “broiled to a golden brown” not unlike John Wilkes Booth in the Garrett barn.

The rear of the menu contains a short biography of Boston Corbett’s life.

Noticeably missing from this brief biography is any mention of Corbett’s paranoia induced nervous breakdown in 1887 in which he made threats and waved a gun at representatives in the Kansas state house. For this mania he was committed to an asylum before managing to escape into oblivion.

After a little searching, I found that the Boston Corbett Supper Club had been located in Concordia, Kansas. Starting in 1878, Boston Corbett resided just north of Concordia in a dugout structure built into a hill. I drove out to Corbett’s dugout home, visiting other sites along the way, last summer. You can see my images and videos from that trip here.

The Boston Corbett Supper Club was used as a venue for wedding rehearsal dinners and receptions in the Concordia area and even supported Concordia’s annual 4th of July fireworks display. Unfortunately, a supper club based around the brave avenger of Lincoln who was also a partially crazed eunuch couldn’t make ends meet and so “Providence directed” it to close in the early 1990’s.

Though we missed out on our chance to dine at the Boston Corbett Supper Club, its menu has me thinking about opening my own Lincoln assassination restaurant in the future. For possible dishes I’ve thought of: Our American Couscous, Sic Semper Tilapia, Seward Skewers, George’s Beer-Battered Yellow Croaker, Physician’s Pie a la Mudd, and John Wilkes Bologna Sandwich.

Let me know your ideas for menu items in the comments below.