Present: All nine members of the military commission, the eight conspirators, Judge Advocate General Joseph Holt, Assistant Judge Advocates Bingham and Burnett, and the recorders of the court.

After the conclusion of yesterday’s session, General John Hartranft, the officer in charge of the conspirators at the Old Arsenal Penitentiary, received a communication from his superior, General Winfield Scott Hancock. Gen. Hancock had received word that Dr. Mudd was being given special treatment and wanted an explanation for this. Part of the special treatment consisted of how, over the last two court sessions, Dr. Mudd had been seated in front of the prisoners’ dock rather than in line with the others. Gen. Hartranft replied back that:

“On Tuesday [May 9], when the prisoners were taken into Court, Dr. Mudd and Mrs. Surratt happened to be the last prisoners brought in; the other six were taken into the prisoner’s dock and by seating the person in charge of each prisoner by his side, the room was all taken up. When the Dr. was brought in, he was placed on a chair just in front of the other prisoners and outside of the railing. Mrs. Surratt was also seated near him. To day [May 10] the prisoners were brought in and seated in the same manner, I thinking that it would be more convenient for the Court to have them seated the same each day…I disclaim all intention of granting to Dr. Mudd any privileges.”[1]

Even though Gen. Hartranft had thoroughly explained the reason Dr. Mudd had been seated outside of the prisoners’ dock during the first two days of the trial, it seems he decided to place Dr. Mudd onto the dock today in order to prevent others from feeling Dr. Mudd was being given special treatment. To accomplish this, Gen. Hartranft removed the guard closest to the grated window which shifted everyone down and provided a space for Dr. Mudd to sit at the end of the dock.

The record of the prior day’s session was read and approved.

Two attorneys were presented and sworn in to represent Dr. Samuel A. Mudd. They consisted of: 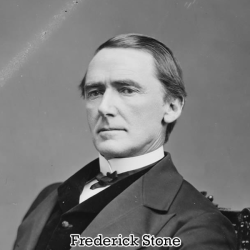 Two other attorneys were presented and sworn in to represent Mary Surratt. They consisted of: 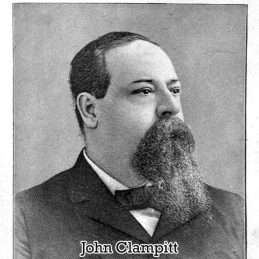 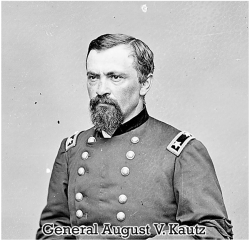 “The court met this morning but were not able to transact any business on account of the absence of Counsel.”[2]

The D.C. newspaper, Evening Star, gave brief descriptions of some of the trial lawyers that were admitted on this day:

“Messrs. Aiken and Clampitt are well known here. The former graduated at Howard Law school several years since, and the latter graduated at Columbia College a few years ago with honor, taking one of the prize medals, we believe, for elocution. They each figured during the late Presidential campaign at the McClellan headquarters, (Parker’s Hall.)

Mr. Frederick Stone, of Port Tobacco, appeared as counsel for Dr. S. A. Mudd. Mr. Stone hails from Port Tobacco, Md., and is from an old and respectable family. He has practiced in the courts of the lower counties of Maryland for several years past and has considerable local reputation.”[3] 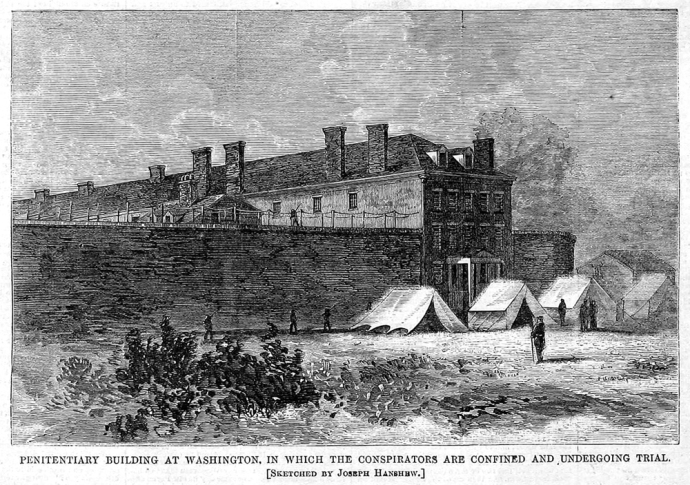 The following is a detailed description of the setting of the trial:

“Four-and-a-half street, leading to the place of trial of the conspirators, is strongly guarded from Pennsylvania avenue to the Penitentiary building. At the upper gate there is a strong guard, and a line of sentinels extends to the building, where is posted a strong guard of Veteran Reserves. At the east door there are a number of officers on duty, and through this is the entrance to the court room. On entering the wide hall those privileged with passes signed by the President of the Commission, General Hunter, are directed to a wide stairway which leads to the hall on the second floor, and from the small room in the northeast corner of the building. A new stairway has been thrown up at the northeast corner of the building to the court room, the door being a small one at the northeast set in a tongue and grooved casing. The stairway from the ground floor is covered with a matting, as well as the court room. As we proceed towards the court room we find at the foot of the stairway a sentinel who says not a word but motions us to proceed, and so on we find a sentry at every turn. In the second story room, from which rises the stairway to the court above, a number of officers are found at a table in the centre awaiting orders, while around the room are orderlies ready to gallop off with any summons or message from the court. Opposite to this room is another of like size for witnesses.

The court room is, as before stated, the northeast room of the third story, about forty by fifty feet, with four windows – two on the north side and two on the east – each heavily grated. At the west end of the room is the prisoners’ stand, raised about one foot from the floor, and surrounded by a plain railing about four feet high, extending nearly the whole width of the room, there being left at this end just enough space to admit of a heavy wooden door being set in the wall. This doorway has been lately cut through, and the door itself is of wood, thickly studded with bolts. This door leads into the prison where the accused are confined. On the south side are two doors, the one nearest the prison box being closed, while the one nearest the east wall opens into an adjoining room. The Court is seated around a long green-baize-covered table, on the north side of the room, General Hunter occupying the seat nearest the door, while at another table is seated the official reporters of the commission…The witness stand is in the center of the room, and is about one foot high, surrounded by a railing.

The walls of the room are plastered and whitewashed, and thus with the light thrown in by two windows to the north and the east, the room has a tolerably cheerful aspect by day; and gas fixtures have been liberally distributed to afford light should the Court sit at night, as it is expected may happen in the course of the trial. Two upright stoves, a water cooler, some exceedingly hard-bottomed chairs, a tier of benches against the wall, and a score of abundantly patronized spittoons, complete the furniture of the room.”[4]

[1] John F. Hartranft, The Lincoln Assassination Conspirators: Their Confinement and Execution, as Recorded in the Letterbook of John Frederick Hartranft, ed. Edward Steers, Jr. and Harold Holzer (Baton Rouge, LA: Louisiana State University Press, 2009), 89 – 92.
[2] August V. Kautz, May 9, 1865 diary entry (Unpublished diary: Library of Congress, August V. Kautz Papers).
[3] “The Counsel for the Conspirators,” Evening Star (Washington, D.C.), May 12, 1865.
[4] “The Assassination. Continuation of the Conspiracy Trials,” Evening Star (Washington, D.C.), May 15, 1865.
The drawing of the conspirators as they were seated on the prisoners’ dock on this day was created by artist and historian Jackie Roche.