Like the other Lincoln conspirators who survived trial and imprisonment, John H. Surratt, Jr. experienced difficultly making his way in the world during the aftermath.  The stigma attached to the Surratt name was great.  Employment prospects were bare for the man who had escaped justice in 1865, and then was freed by a hung jury in 1868.  Upon being released, John Surratt traveled to South America for a bit before returning and trying his hand at the mercantile business:

In this venture he failed and he was forced to look elsewhere for employment.  Therefore in 1870, John Surratt started a new career path in Montgomery County, MD.  John Surratt became a teacher.

On September 28th, 1919, Washington D.C.’s Evening Star published an article written by The Rambler.  Titled “The Rambler Finds Another Historic Spot”, the article partially describes John Surratt’s life as a teacher.  Rather than reproducing the entire article, I’ve summed up The Rambler’s narrative below.  If you would like, you can read the full article here.  Be warned however, The Rambler loves his superfluous details.

Essentially the article comes down to this.  In 1919 The Rambler, whether purposefully or by accident, came across the former school site of where John Surratt was a teacher from 1870 – 1873.  Based on his description of the area,  I believe that the former “Schoolhouse Ln.” on which the school once stood is currently called Nicholson Ln. and is located in North Bethesda: 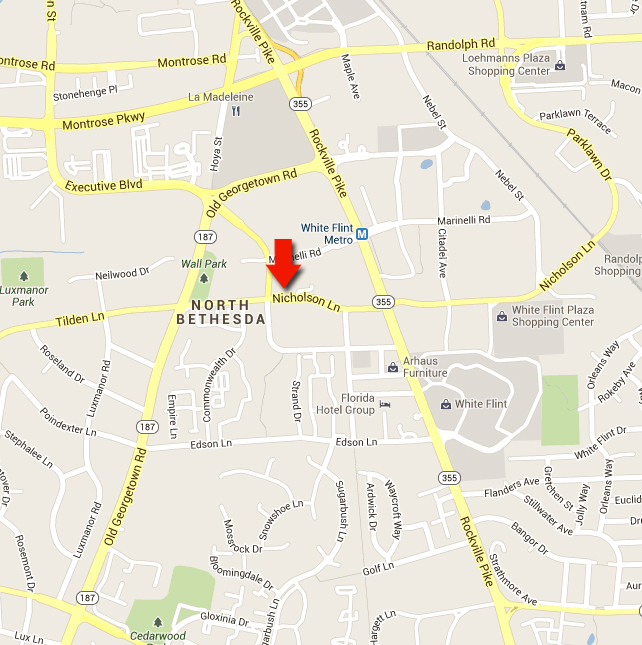 The approximate area where John Surratt was a teacher at Montrose School from 1870 – 1873.

When The Rambler visited this area in 1919, the site was already devoid of any structures.  According to what he heard from those around the area, two schools had once occupied the spot.  The first school there either burned down or was torn down, and the second was torn down around 1909 or so.  The Rambler believed the school in which John Surratt taught was called Montrose schoolhouse also called the “Upper School”.

I’ll let The Rambler describe what he found next:

“A few hundred yards west of the site of the school and on the south side of School House lane is an old frame house set in a shady garden where grow fine old boxwood trace, a giant British yew tree, one of those trees bearing large panicles of blue flowers and which is called “the pride of China” or the “Empress of China” tree, an ash, a willow and a tree locally called “Illinois locust.” There are tubs full of gat petunias and circles and beds of many other flowers. By the side of the house is a vegetable garden, where nearly all the vegetables that can be raised in this climate are growing. This is now the home of Conrad Franklin Maught and his sister, Miss Lucinda. Here it was that John Surratt boarded while a teacher at the “Upper School,” and Mr. Maught was one of his pupils.” 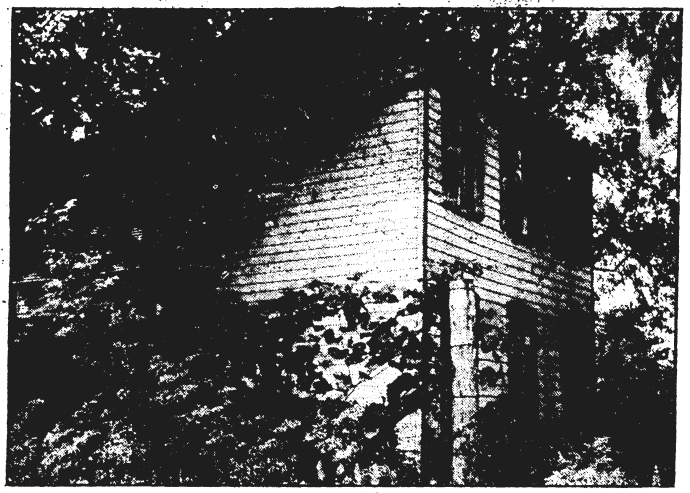 Photograph of the Maught House, where John Surratt boarded when he was a teacher nearby.

“Mr. Maught has a very clear remembrance of John Surratt, and says he was a good teacher, a good man, and is affectionately remembered by all the people who took their lessons under his guidance and who are still living. The first teacher at that school, so far as Maught can remember, was one whose name was Mounts. Another was Thomas Harris, one was Luther Claggett and another William Keefe. Mounts returned to this school, and, if the Rambler is reading his notes straight, he succeeded John Surratt, Miss Blanche Braddock taught at this school, and she is now a teacher in a school at or near Glen Echo. The last teacher at that school was Miss Beulah Dove, who is now living at Rockville.”

The Rambler goes on discussing the other people of the neighborhood, never coming back to the discussion of John Surratt.  Other sources, however, have tried to better account for this time in John Surratt’s life.

It was during this time at Montrose school that Surratt tried his hand at the lecture circuit, telling his sensational life story.  Perhaps he was motivated to do so due to the attention he was able to garner from his students.  His first lecture was on December 6th, 1870 in the Montgomery County Courthouse.  As a local celebrity, his first lecture was well attended and received generous reviews.  Armed with an agent, Surratt scheduled further lectures in New York, Baltimore, and even Washington, D.C.  It is probable that Surratt was expecting his newfound career of lecturing to take off, and that he would soon be quitting his teaching job.  That was not to be, however.  As author, Andrew Jampoler wrote in his book, “The Last Lincoln Conspirator“, Surratt was “shredded” by his New York reviewers.  One review scorned him for, “hawking his mother’s corpse,” and went on to say the lecture was, “the most flagrantly and deliberately indecent method of making money which has ever occurred to the depraved human mind.”  When his lecture came to D.C. as advertised below, the mayor prepared for riots.  Though a crowd had gathered to gain admission, the D.C. lecture never occurred because Surratt had been arrested in Richmond the day before on charges of selling tobacco without a license during his mercantile days.

After less than a month, John Surratt’s lecturing career was over.  He returned to teaching at Montrose having scarcely enough time to have left it in the first place.  During his tenure as a teacher there he married the woman who would be his wife for 43 years and bear him ten children, Mary Victorine Hunter. 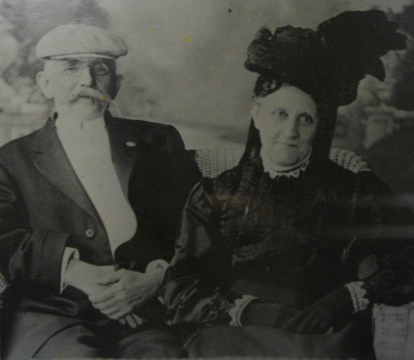 John Surratt and his wife, Mary Victorine Hunter, in their later years.

In 1873, Surratt left teaching in Montrose and became the principal at a new school in Frederick County, Maryland.  About a mile south of the border with Pennsylvania, Surratt was the principal of St. Vincent’s Hall in Emmitsburg.  Like his former school near Rockville, St. Vincent’s no longer stands.

Map of Emmitsburg, MD showing the former location of St. Vincent’s Hall, the school at which John Surratt was principal for a time.

Surratt tenure at St. Vincent’s was ripe with discontentment. On April 26th, 1873 (the 8th anniversary of John Wilkes Booth’s death at Garrett’s farm coincidentally), Surratt wrote a letter to Father Charles Jolivet, a priest who had given him sanctuary in Liverpool, England during his 1865 escape. He wrote Father Jolivet the following:

“My greatest desire, Father Jolivet is to leave this abominable country and go to Europe there to spend the balance of my days in peace and quiet. If I could only feel secure of something to do in France or England that would assure me of a moderate living, I would leave here in less than a week. Ah! Father Jolivet if you could only secure me some kind of employment, you would confer a favor indeed. I have been married about eleven months and am the happy father of a hearty boy.”

Surratt was unsuccessful in this attempt to find employment overseas. Even without any foreign prospects, Surratt could no longer continue in his teaching / principal position.  His tenure at St. Vincent’s Hall was even shorter than his teaching at Montrose. The January 31st, 1874 edition of the local Emmitsburg newspaper, Catoctin Clarion, reported the following:

“Mr. John H. Surratt has resigned the situation of teacher of the Parochial school of this place. He has gone to Baltimore to reside. It is said he is about publishing a book.”

In Baltimore, John Surratt found a job working for the Baltimore Steam Packet Company.  It would be in this career that John Surratt would devote the remainder of his working days.  From 1874 until his retirement in 1915, Surratt worked his way up peaking as the company’s general freight agent and auditor.

John H. Surratt’s foray into teaching was, like so many things in his life previous to it, short-lived.  Regardless, it is an interesting part of his history and, therefore, teaches us more about the characters in Lincoln’s assassination.  So perhaps John Surratt never really stopped teaching after all.