April 13 – 14 Friday the Ides
Until to day nothing was
ever thought of sacrificing to
our country’s wrongs. For six months
we had worked to capture. But our
cause being almost lost, something
decisive ^& great must be done. But its fail
ure was owing to others, who did not
strike for their country with a
heart. I struck boldly and not as
the papers say. I walked with a firm
step through a thousand of his friends
was stopped, but pushed on. A Col
was at his side. I shouted Sic semper
before I fired. In jumping broke my leg.
I passed all his pickets, rode sixty miles
that night with the bone of my leg
tearing the flesh at every jump.
I can never repent it, though we
hated to kill, Our Country owed
all her troubles to him, and
God simply made me the instrument
of his punishment. The country is not

April 1865
what it was. This forced union is not
what I have loved.. I care not what
becomes of me” I have no desire
to out-live my country. This night
(before the deed), I wrote a long
article in which and left it for one of the
Editors of the national Intelligencer
In which I fully set forth our reasons
for our proceedings. He or the Govmt

EDIT: On the animation above I incorrectly transcribed the letters underneath Sunday as “Ms” when it should be “M__ C__”. This likely stands for Machodoc Creek, the place where Mrs. Quesenberry’s house stood. The pair thought they entered Machodoc Creek as directed by Jones, but were actually in Gambo Creek.

Friday 21
After being hunted like a dog
through swamps, woods, and last
night being chased by gun boats till
we I was forced to return wet cold
and starving. With every man’s hand
against me. I am here in despair. And
why. For doing what Brutus was
honored for. What made Tell a
Hero. And yet I for striking
down a greater tyrant than
they ever knew I’m looked
upon as a common cutthroat.
My action was purer than either
of theirs. One hoped to be great
himself. The other had not only
his country’s but his own wrongs
to avenge. I hoped for no gain.
I knew no private wrong. I
struck for * my country
and that alone. A country that
groaned beneath this tyranny
and prayed for this end and
yet now behold the cold hand
they extend to me. God cannot
pardon me if I have done
wrong. Yet I cannot see my
wrong except in serving a
degenerate people. The little 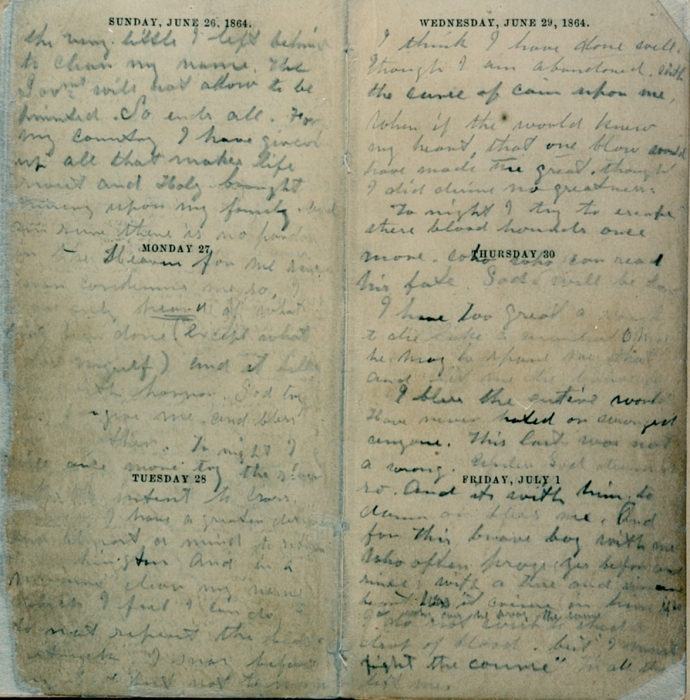 the very little I left behind
to clear my name the
Govmt will not allow to be
printed. So ends all. For
my country I have given
up all that makes life
sweet and Holy brought
misery upon my family and
am sure there is no pardon
in the Heaven for me since
man condemns me so. I
have only heard of what
has been done (except what
I did myself) and it fills
me with horror. God try
and forgive me and bless
my mother. To night I
will once more try the river
with the intent to cross.
Though I have a greater desire
and almost a mind to return
to Washington And in a
measure clear my name
which I feel I can do. I
do not repent the blow
I struck. I may before
my God but not to man.

I think I have done well.
Though I am abandoned with
the curse of Cain upon me,
When if the world knew
my heart, that one blow would
have made me great. though
I did desire no greatness.
To night I try to escape
these blood hounds once
more. Who who can read
his fate. God’s will be done.
I have too great a soul
to die like a criminal. O May
he, May he spare me that
and let me die bravely.
I bless the entire world.
Have never hated or wronged
anyone. This last was not
a wrong. Unless God deems it
so. And its with him to
damn or bless me. And
for this brave boy with me
who often prays (yes before and
since) with a true and sincere
heart was it crime in him. if so
why can he pray the same
I do not wish to shed a
drop of blood but “I must
fight the course” Tis all that’s
left me.

6 thoughts on “The Text of John Wilkes Booth’s Diary”