The assassination of Abraham Lincoln manifested into countless front page headlines in newspapers across the country. From the details of the assassination, the hunt for Booth and his conspirators, and the trial that followed their arrests, nary a day went by between April 15th and July 7th, 1865, that aspects of Lincoln’s death were not “today’s top stories”. While significant and valuable text space was attributed to the big items of the assassination story, minor details had played out in the classified sections of various newspapers before the tragedy occurred. For a long time after the events as well, echos of the crime at Ford’s Theatre popped up in the most innocuous area of the newspaper – the advertisements. Here are a few examples of period advertisements associated with the death of Abraham Lincoln.

On page two of the Evening Star, the attendance of the Lincolns and General Grant is announced for that night’s performance of Our American Cousin at Ford’s Theatre.

The New York Herald announces that night’s performance of the brother’s Booth in their benefit towards the construction of a statue of Shakespeare in Central Park.

After being released from prison for the final time, John Harrison Surratt, Jr. made his way down into South America for about six months. Upon his return to America he tried his hand at the mercantile life with his own business selling tobacco and other commodities like the “slightly damaged” tea above. This business did not last long and about 18 months later, John Surratt would be a teacher in Rockville, MD.

Attempting to cash in on his story and connection to John Wilkes Booth, John Surratt underwent a lecture tour. His lecturing was as short-lived as his mercantile business due to public outcry. 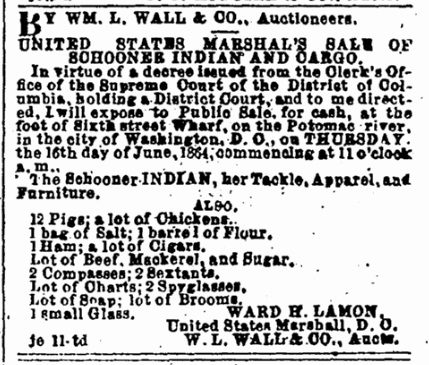 Here’s a good challenge for you all. Can any of you tell me how this sale of a schooner by the federal government is involved in the story of Lincoln’s assassination. Show me your skills by replying in the comment section below.