On May 16th, 1865, Elizabeth Quesenberry gave the following statement to authorities:

“The day that the person I now supposed to be Herold came to my house was on Sunday, the 23rd of April, about one o’clock P.M. He asked my daughter to see the lady of the house, and on being informed that I was absent asked whether I could be sent for. She told him that if he could wait she thought I could. He then remarked to my daughter ‘I suppose you ladies pleasure of good deal on the river.’ my daughter answered ‘No, as we have no boat’. He said that he had crossed the river the night before and had left a very nice little boat by the river bank, which the young ladies could have if they wished. I returned very shortly, and he on seeing me asked if I could not furnish him with a conveyance to take him up the country. I told him no, and asked why he could not walk. She said that he could walk, but his brother was setting down by the river could not, for his horse had fallen and broken his leg; from the way in which he said this, I got the impression that they had both been riding the same horse. He said they were both escaped prisoners, and asked if I could not sell them a horse. I said no, that if I was inclined to assist them I could give them a horse, but that I was not inclined to assist them. He seemed surprised that I was not willing to assist him. I told him that he must go away. He went off very much put out. He went across the field in the direction where I supposed his brother was. I then called to him and asked him if he had anything to eat. He said no and I told him I would go to the house and send him something to eat. I went to the house and after my dinner was over I sent by Thomas Harbin, whom I supposed was a soldier, something to eat. Mr. Harbin, and a Mr. Baden, whom I also suppose was a soldier, came to my house. They had been there before; they had come to my house immediately after the fall of Richmond and they remained there until Mr. Baden was brought to Washington, and Mr. Harbin was there when I left. Harbin returned in about half an hour, and said that she had seen the party the food was for, going on horseback towards Dr. Stewart’s house, and that they told him they were going there. I understood that the horses were furnished by an old man named Bryan never saw the parties afterwards. I became alarmed and suspecting that something was wrong, determined for my own protection to signal to the gunboats, and did hoist a signal and remained there three hours, but they did not come to me. I did not report it to any officer of the government has I had no opportunity to do so and in the meantime I had heard that after they left Dr. Stewart’s they had crossed the Rappahannock at Port Royal and that the soldiers were in pursuit.
E. R. Quesenberry” 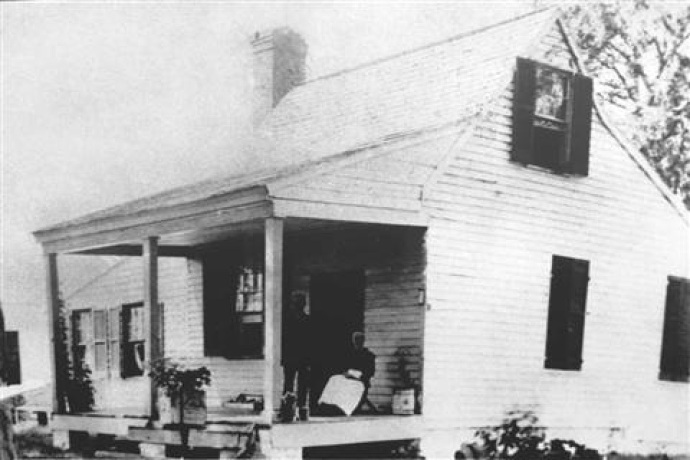 References:
American Brutus by Michael Kauffman
The Evidence by Edwards and Steers