On select Thursdays we are highlighting the final resting place of someone related to the Lincoln assassination story. It may be the grave of someone whose name looms large in assassination literature, like a conspirator, or the grave of one of the many minor characters who crossed paths with history. Welcome to Grave Thursday.

NOTE: I know today isn’t Thursday. I’ve been swamped with getting ready for the new school year to begin and though I tried to get this out yesterday, I found I had to do a bit more research. Rather than wait another week to post it, I figured I’d just post it tonight instead. So enjoy this Friday edition of Grave Thursday.

Connection to the Lincoln assassination:

Mary Van Tyne, whose maiden name was Ricard, was originally born in England. We know she had moved to the  United States by 1833 for it was during that year that she married Dr. John P. Van Tyne in Maryland. By 1840, the pair had relocated to Washington City and quickly began building their family. By 1850, Mary and John were the parents of at least 5 children. In February of 1851, John Van Tyne died at the age of 44, leaving Mary a widow. She supported her family financially by working as a seamstress and dressmaker. As time went on, Mrs. Van Tyne even advertised her talents as a seamstress.

In 1857, Mary’s only remaining son, Charles, died at the age of 21. In the 1860 census, Mary Van Tyne is shown as a widow, working as a dressmaker with her four daughters: Mary, Kate, Florida, and Ellen.

During the Civil War, the population of D.C. boomed. Many homeowners made supplemental incomes by renting out rooms. Conspirator Mary Surratt would follow this route after relocating from her Maryland tavern to her D.C. town home. Mrs. Van Tyne, likewise started to rent out rooms and advertised her spaces in the D.C. papers.

In February of 1865, two men took up Mrs. Van Tyne’s offer of lodging and began renting one of her rooms. Their names were Samuel Arnold and Michael O’Laughlen and, unbeknownst to Mrs. Van Tyne, they were taking part in John Wilkes Booth’s plan to abduct President Lincoln.

While Mrs. Van Tyne did not have a lot of contact with her new boarders, she did get to know a few things about them. For instance, Mr. O’Laughlen told her that he was also known as McLaughlin, and that if she should receive any mail addressed as such that it should come to him. Once, when cleaning their room, she came upon a pistol but didn’t think much of it and merely placed it in a bureau drawer for safe keeping. Often, the two men would leave and go to Baltimore on a Saturday and not return to the city until Monday or Tuesday. 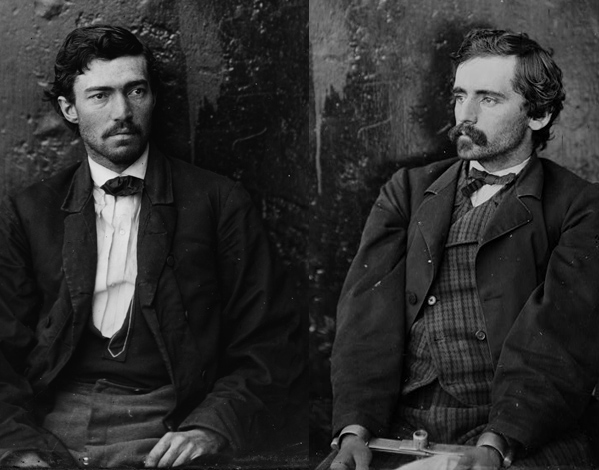 The two men were also frequently visited by a handsome man. The man would call at all times of day looking for the men and leaving messages for them. Finally, Mrs. Van Tyne inquired with her boarders about who the handsome man was. They informed her that he was John Wilkes Booth, the popular actor. Once, Mrs. Van Tyne overhead something among the men about business and she later asked Arnold what business they were in. Arnold replied that the three men were in the oil business together in Pennsylvania. Booth was a common visitor and often appeared to keep her boarders out late. Mr. Arnold and O’Laughlen had a night key which allowed them to come and go as they pleased. Since they were sleeping in a back bedroom on the first floor, she did not always know whether they were home or not.

Finally, on March 18th, Arnold and O’Laughlen told Mrs. Van Tyne that they were going to be leaving for good on Monday the 20th. They were off to the Pennsylvania oil fields, they told her. They mentioned that while they were anxious to leave that very night, Booth was performing at Ford’s Theatre and they wanted to see him. Mrs. Van Tyne expressed her own desire to see Booth perform. Grateful for the lodging Mrs. Van Tyne had given them, O’Laughlen gave Mrs. Van Tyne three complimentary tickets for Booth’s performance in The Apostate at Ford’s Theatre that night.

Mary Van Tyne neither heard from nor saw Mr. Arnold or Mr. O’Laughlen after they left on March 20th. After the assassination of Lincoln, the identities and movements of John Wilkes Booth’s conspirators were traced. On May 5th, Mrs. Van Tyne was interviewed by Baltimore provost marshal, James McPhail. McPhail and his men were largely responsible for hunting down Arnold and O’Laughlen. Mrs. Van Tyne told all that she knew about the two men who stayed in her home.

Ten days later, Mrs. Van Tyne was among the first to be called to the witness stand at the trial of the conspirators. She testified about Booth’s common visitations to her home in search of Arnold and O’Laughlen. She was also asked to identify a picture of Booth as the man she saw. While she identified it, she also made the observation that the photograph presented to her was a poor likeness of the man and did not truly capture how handsome Booth was. After providing her testimony for the day, Mrs. Van Tyne returned home and back into obscurity.

Mary Van Tyne continued to live in Washington, D.C.. By 1870, she moved out of her D street boardinghouse and began living with her daughter, Florida, who had married a man named Friebus. She would live with her daughter and son-in-law for the rest of her life. On December 18, 1886, Mary Van Tyne died of “valvular disease of [the] heart”. Her age at death is difficult to determine. Her obituary stated that she was “in her eighty-first year.” Her burial records give her an age of “80 years” and “5 months” at time of death. The census records did not really help the matter. Unlike many census records where women miraculously age less than a decade in the ten years span between censuses, Mrs. Van Tyne actually managed to age more than ten years between the 1860 and 1870 census. The 1850 and 1860 census records give her birth at about 1812 which would make her about 74 at her death. The 1870 and 1880 censuses give her birth at about 1806 which puts her back up at 80.