In Memory of Art Loux

On December 29th, 2013, the world lost an unmatched historian by the name of Arthur F. Loux. 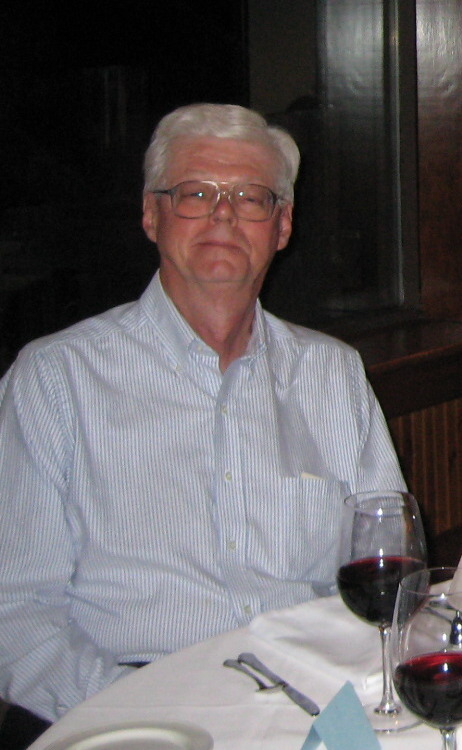 To those who knew and corresponded with Art, he needs no introduction.  Art was an original “Boothie” of the highest order.  You’ll find his name in the acknowledgement and reference sections of several imminent assassination books including, American Brutus by Michael Kauffman, Blood on the Moon by Edward Steers, and Manhunt by James Swanson.  Art’s encyclopedic knowledge on John Wilkes Booth was due to his decades long work of meticulously chronicling the assassin’s life.  In 1990, he privately published his manuscript, entitled John Wilkes Booth: Day by Day.  Rather than selling his work, he selflessly presented the 12 copies his work as gifts to his fellow colleagues and friends.  Since that time, Art’s manuscript has proven to be one of the most sought after resources and references for assassination authors.  The copy of his manuscript at the James O. Hall Research Center is one of the most well loved and consulted books in the collection.

Art had a deep interest in the living Abraham Lincoln as well and was well versed in the histories of many Civil War generals.  He was one of the founding members of the Lincoln Group of New York and served as the group’s first secretary.  Upon his relocation to Kansas, Art was very active in the Lincoln Club of Topeka, serving in a variety of positions.  Art loved to travel and was a longtime “cemetery buff” taking pictures of countless historical graves all over the world.

Art Loux was also the most generous man I have ever had the honor to know.  Though we never met in person, over the last year and a half Art has graciously sent vital and important information about many of the subjects discussed here on BoothieBarn.  I found myself often referring to Art when I had a question that I couldn’t find an answer for.  I quickly came to admire this man who knew practically everything about Lincoln’s assassination.  When I asked about the early “Boothie” days and the first few Surratt Society Booth Escape Route Tours, Art sent me three DVDs filled with audio recordings.  The collection contained early narrations of the escape route from the “greats” like James O. Hall and Mike Kauffman, recorded speeches from a multitude of notable authors and researchers, and the practically “play by play” research conducted by Art, John C. Brennan, and others in archives and libraries.  I inhaled the recordings, hearing, for the first time, the voices of the men who laid the groundwork for today’s scholarship.  I expressed my deep appreciation to Art for the most generous gift. He replied back with the mantra that had been the guiding principle for the early Boothies, “the more one shares the more one learns.”

Art was instrumental to the development of the National Geographic special “Killing Lincoln” which aired back in February of 2013.  He sent the producer of the program, Erik Jendresen, a digital version of his book, JWB:DBD, which he never stopped working on.  His name is seen in the credits at the end of the show.  When Erik presented at the annual Surratt Society conference in March, he expressed how the show could not have been produced without Art’s help.  Art was not able to make it to the conference, but as I sat there listening to Erik’s accolades for him, I took out my cellphone and sent a short email to Art:

I’m sitting here right now watching Erik Jendresen give his presentation and I wanted to let you know that Erik is singing your praises.  I wish you were here to appreciate how grateful he is to you.  Wonderful work, Mr. Loux.

Art replied back to me the next morning with:

Thanks for your kind and thoughtful message.  Working with Erik was one of those peak experiences.

That was Art.  He was never one to toot his own horn or clamor for attention.  He was content knowing that he had helped another human being and had shared all that he could.

In June, Art asked for my address again stating that he had “something” to send me.  I happily provided him with it, anxious to receive anything from the man who had become the best teacher I had known.  In the mail I received a 16 gigabyte flash drive, without any sort of note as to its contents.  When I plugged it into my computer, I was speechless to discover that it contained the entirety of Art’s assassination archive.  Every letter, every page, every article that he possessed regarding the Lincoln assassination had been scanned, organized and archived.  I emailed him back in complete shock, thanking him for what is the most generous gift I have ever been given.  He replied back that there was no need to thank him as it was, “a joy for me to share this stuff.”  Though I’ve had the archive for six months, I’ve barely scratched the surface of the materials before me.  Thanks to Art, I found and visited the former home of conspirator, Samuel Arnold.  Thanks to Art, I was able to assemble a thorough accounting of what is known about John Wilkes Booth’s time at the Indiantown farm.  Thanks to Art, Booth’s forgotten sister Rosalie is less forgotten.  I will never be able to repay Art for the gift of knowledge he has bestowed on me.  But, like him, I will do my best to share as much of it as I can.  Every time you see “The Art Loux Archives” in the references section for a post, know that what you read is due to the generosity of this great man.

On December 27th, I (and many others in the assassination field) got an email from Art.  In it, he announced his success in signing a contract with McFarland Publishing to have his magnum opus, John Wilkes Booth: Day by Day published for the masses.  Art had never stopped working on his manuscript, revising, editing and adding to it since he published it privately in 1990.  We all wrote him back with our congratulations and our shared anticipation of the book’s unequivocal success.  For a man who had given so much to so many others over the years, we all knew he was more than deserving of the wide recognition the book would garner him.  Art passed away in his sleep two days later, having fought a long battle with a form of muscular dystrophy.  Art’s daughter, a respected historian herself, is finishing her father’s work and will ensure that it will be published per his wishes.

Art’s book will easily become the premiere resource for Lincoln assassination readers and researchers.  Of that, there is no doubt.  His death, right at the culmination of his life’s work, is nothing less than tragic.  Though he never sought it, Art Loux deserved to experience the public admiration that will accompany his book.  We, his friends and colleagues, mourn his loss deeply for he never got to experience the accolades he rightly earned.

I know that, as a public blog, many of those who will read this post will not have known Art.  Though you may know his name from his aforementioned book, it is impossible to accurately describe how special he was.  Over the last several days, I have tried my best to think of someway to portray him as more than a biography.  I decided the best way to attempt this was to share pictures, recordings, and writings of Art’s.  In this way it is hoped that even strangers who never knew him can start to understand and appreciate his amazing life.

Though John Wilkes Booth: Day by Day will stand as Art Loux’s most public achievement, the love he spread and the lives he touched demonstrate his greatest work.  He lived a life of generosity and humility.  I am honored to have known him. and I will strive to follow in his footsteps. 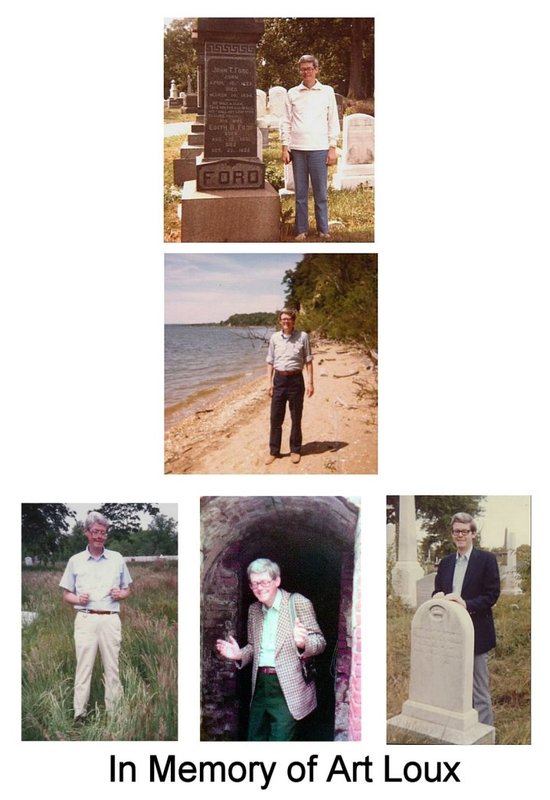 A collage of Art Loux created by his friend and fellow researcher, Betty Ownsbey. 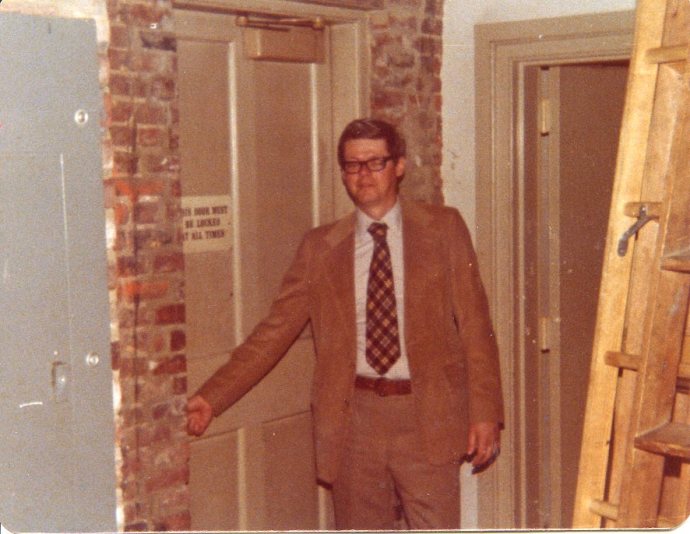 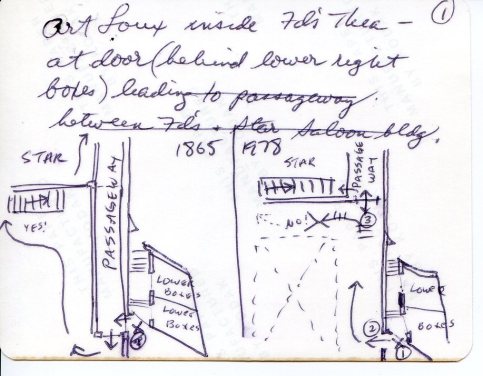 “The bus pulled away from the Surratt House early on a beautiful May day in 1977. The prospect of traveling Booth’s escape route filled me with anticipation. I had never met anyone else on the tour. As the bus bumped along from stop to stop, the passengers listened with rapt attention to James O. Hall, the tour guide, a venerable, white-haired gentleman with, as he described it, an Ozarkian accent. I soon found myself absorbed in interesting conversations on all variety of subjects with my seat-mate, a man somewhat older than I. The man was a bundle of energy. He passed pictures and descriptive sheets among the passengers. He seemed to know everyone on the bus. It seemed, within minutes, I had known John Brennan for years…I kept in touch with John after the tour. Soon my mailman began delivering daily letters overflowing with interesting items. Most often the letters contained information related, no matter how remotely, to the Lincoln assassination…Letters received by John were often disseminated to a large number of his correspondents. I felt I had arrived the first time John distributed one of my letters.” – Art Loux in his memorial about fellow researcher John C. Brennan

“Once I was taking pictures in back of Ford’s Theatre when the rear door opened. Someone obviously was giving a tour to Vincent Price who was then appearing at the theatre. Suddenly face to face with Vincent Price my warped mind quickly thought – he’s an actor, he’s coming out the rear door of Ford’s Theatre – so I said, “Did you shoot the President?” He looked at me like I was obviously deranged and shut the door without a word.” – Art Loux in an email to a friend 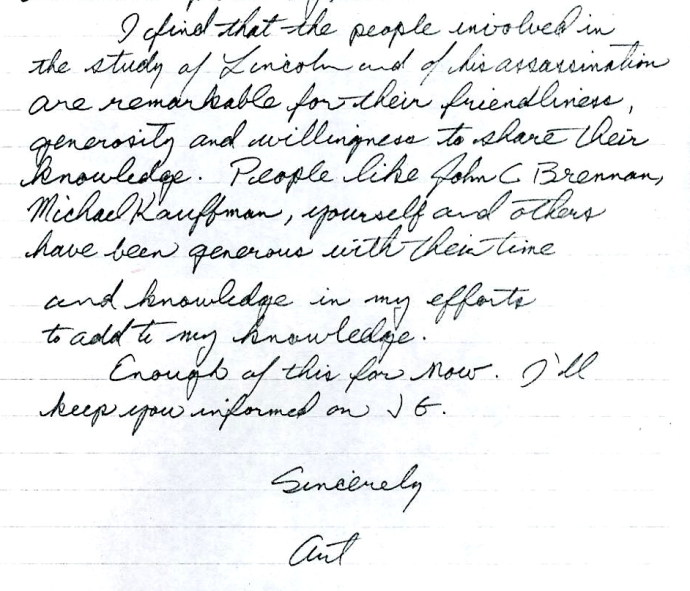 6 thoughts on “In Memory of Art Loux”