Harry Hawk’s Letter to his Parents 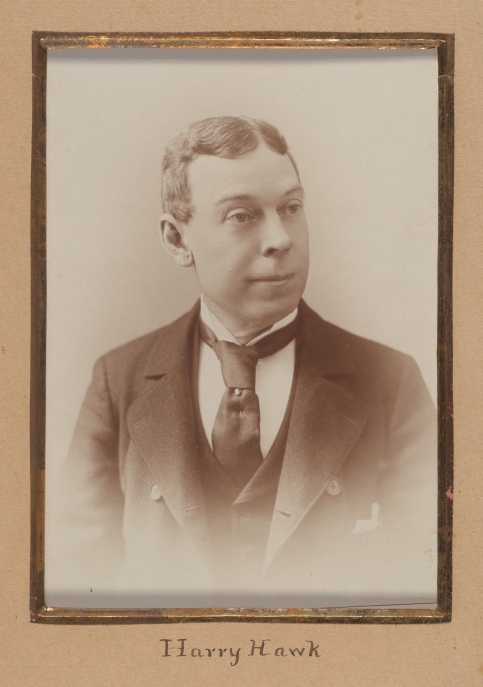 Actor Harry Hawk was the only person on stage when Booth assassinated Lincoln.  When Booth jumped to the stage, brandishing a bloody knife in his hands, Hawk turned and ran from him, fearing for his life.  In the hours  following the assassination, Hawk gave a statement to Corporal Tanner who, under orders from Secretary of War Edwin Stanton, was collecting evidence in the parlor of the Petersen House.  In addition to this official statement, Hawk also wrote a letter to his parents in Chicago to tell them of the events.  Here is his letter, dated April 16th, recounting the tragedy:

This is the first time I have had to write to you since the assassination of our dear President on Friday night, as I have been in custody nearly ever since, I was one of the principal witnesses of that sad affair, being the only one on the stage at the time of the fatal shot. I was playing Asa Trenchard, in the “American Cousin,” The “old lady” of the theatre had just gone off the stage, and I was answering her exit speech when I heard the shot fired. I turned, looked up at the President’s box, heard the man exclaim, “Sic semper tyrannis,” saw him jump from the box, seize the flag on the staff and drop to the stage; he slipped when he gained the stage, but got upon his feet in a moment, brandished a large knife, saying, “The South shall be free!” turned his face in the direction I stood, and I recognized him as John Wilkes Booth. He ran toward me, and I, seeing the knife, thought I was the one he was after, ran off the stage and up a flight of stairs. He made his escape out of a door, directly in the rear of the theatre, mounted a horse and rode off.

The above all occurred in the space of a quarter of a minute, and at the time I did not know that the President was shot; although, if I had tried to stop him, he would have stabbed me.

I am now under one thousand dollars bail to appear as a witness when Booth is tried, if caught.

All the above I have sworn to. You may imagine the excitement in the theatre, which was crowded, with cries of “Hang him!” “Who was he?” &c., from every one present.

In about fifteen minutes after the occurrence, the President was carried out and across the street. I was requested to walk down to police headquarters and give my evidence. They then put me under one thousand dollars bond to appear at 10 o’clock next morning. I then walked about for some time as the city was wild with excitement, and then I went to bed. At half-past three I was called by an aid of the President, to go the house where he was lying, to give another statement before Judge Carter, Secretary Stanton, and other high officials assembled there. I did so, and went to bed again. On Saturday I gave bail.

It was the saddest thing I ever knew. The city only the night before was illuminated, and everybody was so happy. Now it is all sadness. Everybody looks gloomy and sad.

On that night the play was going off so well. Mr. and Mrs. Lincoln enjoyed it much. She was laughing at my speech when the shot was fired. In fact it was one laugh from the time the curtain went up until it fell — and to think of such a sorrowful ending! It is an era in my life that I shall never forget. Inclosed is a piece of fringe of the flag the President was holding when shot.”

To learn more about Harry Hawk, the other actors, and employees of Ford’s Theatre that fateful night, I recommend pre-ordering Dr. Tom Bogar’s upcoming book, “Backstage at the Lincoln Assassination: The Untold Story of the Actors and Stagehands at Ford’s Theatre“. Dr. Bogar spoke at the 2013 Surratt Society Conference and has done a phenomenal job delving into the history of these forgotten souls.  The book is due to be released in November, so pre-order it from Amazon today!

9 thoughts on “Harry Hawk’s Letter to his Parents”