After Oswell Swann led John Wilkes Booth and David Herold through the Zekiah Swamp, he brought the pair to Rich Hill, the home of Col. Samuel Cox. The fugitives allegedly spent a few hours inside the house in conversation with Col. Cox, who ultimately agreed to do what he could for the men. He told them he would send his foster brother, Thomas A. Jones, to meet them in a nearby pine thicket and that he would care for them and help get them across the Potomac River. In the morning, Col. Cox sent his son, Samuel Cox, Jr., over to Huckleberry to retrieved Thomas Jones. When Cox, Jr. got to Huckleberry, he said his father wished to meet with Jones to discuss the purchase of some seed corn. Jones found such an ill timed request, on Easter Sunday no less, to be a cryptic one. When Cox, Jr. then spoke to Jones privately and stated that two strangers had come by Rich Hill house during the night, Jones seemed to already comprehend the situation before him. He made his way to Rich Hill with Samuel Cox, Jr.

My reason for summarizing this event is to give some context for the following. Samuel Cox, Jr. was not Col. Cox’s son. Rather, he was his nephew. 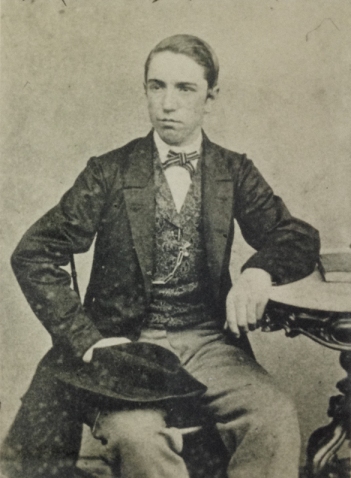 Samuel Cox, Jr. was born Samuel Robertson. He was the son of John R. Robertson and Rebecca Cox. Rebecca and Col. Cox were siblings. Rebecca died two months after Samuel’s birth. During his youth, Samuel spent a lot of time on his uncle’s farm of Rich Hill. By 1852, Samuel’s father, John Robertson, had remarried and started having children with his new wife. Meanwhile Col. Cox and his wife Walter Ann, had not been able to have any surviving children of their own. It appears that Samuel Robertson found himself with his uncle more and more, and Col. Cox was more than happy to have a child to raise. Col. Cox officially became “Pa” to Sammy Robertson three days after his 17th birthday.  On February 11th, 1864, the families decided to make their long held relationship official and Col. Cox adopted Samuel Robertson and gave the young man his name: 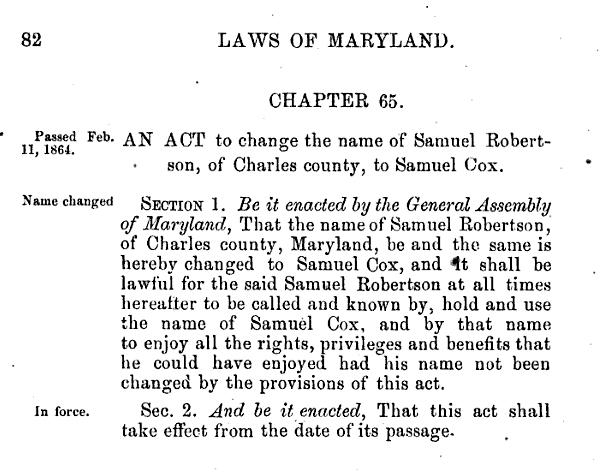 It’s clear that Sammy Cox, Jr. was well loved by his adoptive parents. In the aftermath of the assassination Col. Cox, Samuel Cox, Jr. and their devoted servant Mary Swann, were all arrested and kept at the Bryantown Tavern. Col. Cox was later taken to Washington, D.C. and was imprisoned at the Old Capitol Prison. A few days after this, Samuel Cox, Jr. and Mary were brought to Washington and were required to report to the Provost Marshall’s office every day for about three weeks before they were allowed to return home. While Col. Cox was imprisoned at the Old Capitol, he wrote a letter to his wife to keep her spirits up. “Unite with me in devout prayer to our Merciful Father to guide, sustain, and so direct all things that we may soon be restored to each other,” Col. Cox wrote in his May 21st letter. The Col. also spoke of his son when he told his wife, “I have received one [letter] from Sammy today dated yesterday stating that he would leave for home today (also Mary)…I hope Sammy arrived home safe.”

Samuel Cox, Jr. nee Robertson, may not have been Col. Cox’s biological son but he proved himself to be a worthy heir. He became a prominent pillar of the community as he lived out the rest of his life at his father’s home of Rich Hill. And today, father and son share the same burial plot at Mt. Rest Cemetery in La Plata, Maryland.

Deer fawns at Mt. Rest Cemetery in La Plata, MD. The Cox family graves can be seen on the left side of the image.

5 thoughts on “The Name Game”