Last Sunday’s The Washington Post devoted an entire section to the Civil War:

Inside the 16 page section there were several interesting articles relating to Civil War events that happened 150 years ago. While exploring it my attention was drawn to a couple of advertisements regarding the assassination: 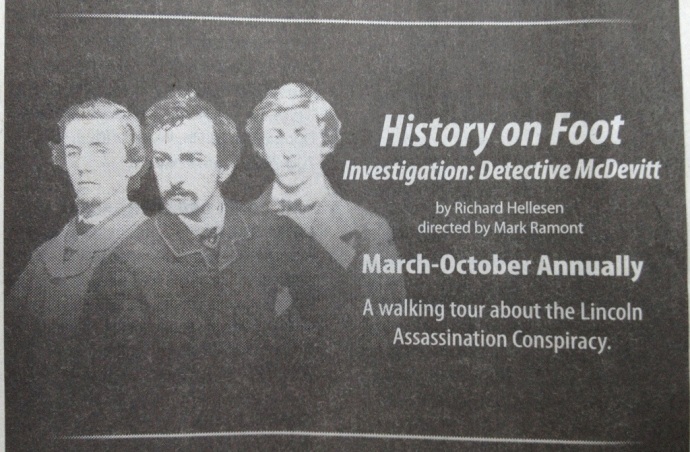 I like seeing the rarely used wanted poster image of David Herold in the advertisement for Ford’s Theatre walking tour and the small note on the bottom of the Surratt House, “Ask about our popular John Wilkes Booth Escape Route Tours”. They are quite popular, indeed.

In addition to these ads, there was also a Visit Maryland ad that highlighted their Civil War Trails program:

It also mentioned their new mobile app and so I decide to download it:

I wanted to see how their tour app of the assassination route compared to the app created in conjunction with Michael Kauffman’s new book, In the Footsteps of an Assassin:

So, as of now, Michael Kauffman’s app is still the only mobile app out there for the assassination route. The app itself is free and called, “MyTourGuide” and then it costs $9.99 to purchase the escape route tour. There are a few mistakes in it, (the Herndon House narration doesn’t work, the locations of some of the sites are a bit off) but it’s a nice start for those who want/have to experience Booth’s escape on their own. Once the Civil War Trails app is updated, I’ll review that one further.

9 thoughts on “Assassination Ads and Apps”