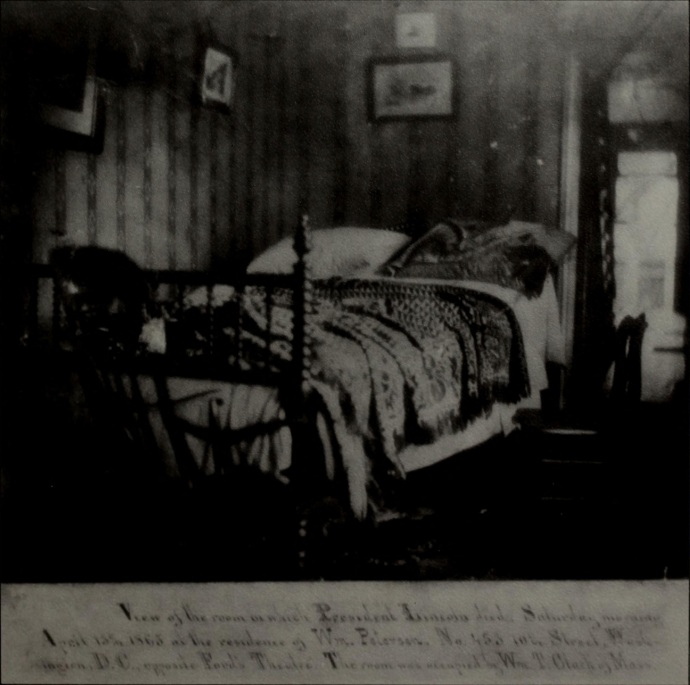 There are several blood relics associated with Abraham Lincoln’s assassination: swatches of Laura Keene’s bloodied dress, playbills and misc papers dipped in Lincoln’s blood as he was carried from Ford’s, and the remnants of the physicians’ cuffs and clothing at Lincoln’s death-bed.  The most intact blood relics, however, come from the Petersen House itself.  From pillows, to sheets, to towels, the Petersens sacrificed a great deal of their household furnishings for the dying President.  In the aftermath, they experienced more loss as relic hunters seized upon their boarding house.  As William Clark, the man who was renting the room in which Lincoln died but was absent the nightof the 14th, wrote to his sister on April 19, 1865:

“Everybody has a great desire to obtain some momento from my room so that whoever comes in has to be closely watched for fear they will steal something.”

The number of items we have today regarding Lincoln’s last moments demonstrates that there was considerable loss on the part of the Petersens. After a few months had passed for national grieving, the Petersens appealed to the government:

Adjusted for inflation, $550 in 1865 is equal to about $8,000 today. Michael Kauffman, author of American Brutus, states in his book that he could find no record that the Petersens were ever awarded compensation for their claim.   Part of me feels sorry that the Petersens gave so much for the dying President and got nothing in return, while the other part of me feels that the eternal preservation of their former home and name as a part of a national park may be compensation enough.