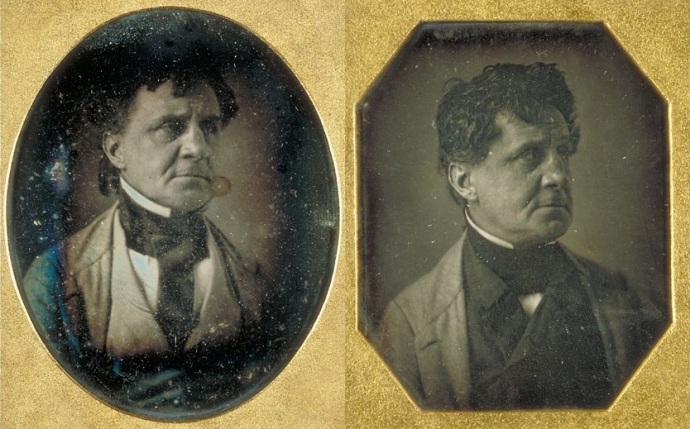 “On reaching Cincinnati, the masons had the body embalmed in a metallic coffin and deposited in the Baptist vault. My mother was telegraphed for and arrived in Cincinnati expecting to find my father very ill, — the second dispatch, announcing his decease not reaching Baltimore until her departure from that city. She returned home as soon as possible, bringing the body with her for interment. For three days the house where the body lay was thronged with people of every class. The walls of the parlors were draped with white, covering pictures and mirrors, and all ornaments removed excepting a marble figure of Shakespeare, which was placed near the coffin, and seemed gazing down at the form beneath. The face, under the glass plate, was very calm and beautiful, and the brown hair more thickly strewn with white than when we saw it last; the gray eyes were partly visible between the half-shut lids; and the lips, retaining their life-like color, were smilingly closed. Such a placidity and repose pervaded the whole countenance that we felt how easy the transition must have been from suffering life to this calm sleep. How often we had found him at rest with just this look upon his face, and had stepped softly not to disturb him! Now its perfect naturalness occasioned doubt in many minds, and physicians were sent for to satisfy us whether this w as really death or a trance. The hope was futile and vain, but while it animated the hearts that suffered, it had become as powerful as life.”

-Asia Booth Clarke on her father’s death in Booth Memorials:Passages, incidents, and anecdotes in the life of Junius Brutus Booth