Edwin Booth and the “Big Hole in the Ground” 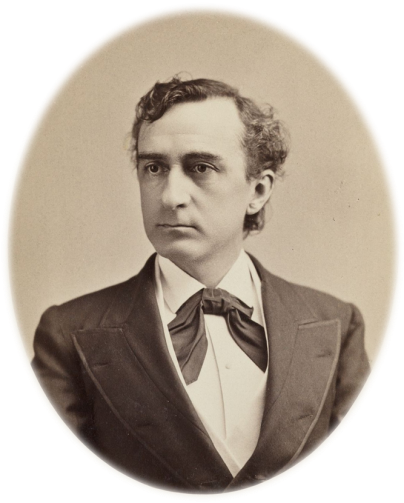 In 1876, eleven years after his brother assassinated Abraham Lincoln, Edwin Booth was still making his living as a touring actor. After a brief period of respectful grief and contemplation in the months following his brother’s crime, Edwin’s success and fame as an actor had only increased through the years. However, while Edwin was widely respected and praised for his talents, his business dealings over the past decade had hurt him considerably. The lavish theater he financed, constructed, and named after himself in New York had bankrupted him and he had been forced to sell ownership of it to help cover his debts. As much as he disliked the stress of touring, it was the only way he was able to recoup his losses and provide for his family. He had hoped the Booth Theatre would be his home for years, but its failure required him to retake the role as a touring star.

One man who knew the pain of losing a theater all too well was John T. Ford – he having lost his theater in Washington due to Edwin’s brother’s crime. John T. Ford approached Edwin Booth with an idea for a tour of the heart of the former Confederate states. Edwin Booth had not played in these areas since before the Civil War and John T. Ford assured Edwin that there would be a fortune to be made in his return. Edwin agreed and starting in January of 1876, he began a tour of cities in Virginia, North Carolina, South Carolina, Georgia, Alabama, Tennessee and Kentucky. Joining him on this tour was his second wife, Mary McVicker. As Ford had predicted, Edwin was widely acclaimed during his performances in the South. “It was an ordinary sight to behold the ladies standing in double lines throwing flowers in his path as [Edwin] walked from his hotel to the theatre,” the company manager John Barron later recalled.

While the tour was a financially successful one and Edwin was pleased by the reception of his audiences, he was often displeased with the newspaper articles that accompanied his tour. The articles often contained “disgraceful anecdotes” about his father, Junius Brutus Booth, “all in the main false or exaggerated.” Worse yet, Edwin could not escape the shadow of his brother’s crime. He would write to a friend that during his tour he was, “daily reminded of the disgrace and misery that can never be forgotten by me or any member of my family.” Edwin was no doubt aware that there was a strong desire by many Southerners to see not just “Booth, the great Tragedian” but also “Booth, the brother of the assassin.”

The tour with Ford was a short one with Edwin completing his final performance in Bowling Green, Kentucky on March 3rd. The entire tour grossed almost $90,000. Edwin made his own arrangements to perform in Louisville, Kentucky starting on March 13th, leaving him with a few days of downtime. Edwin decided to take this opportunity to visit a local landmark, Mammoth Cave. 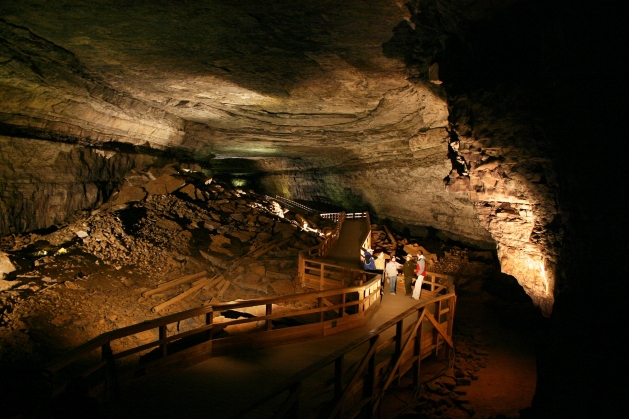 Mammoth Cave is the longest known cave system in the world with over 405 miles worth of surveyed passageways. Edwin Booth was greatly impressed by his experience touring through just a small bit of the cave system and wrote about his experience to his daughter Edwina. Please be aware that in this letter Edwin writes the words of his black guide, William Garvin, in the form of “negro dialect” which is most widely known today due to the writings of Mark Twain. Edwin also demonstrates his racial views which, while not acceptable today, were common with white men of the period. Edwin Booth was likely unaware that his guide was a veteran of the Civil War and had done more to protect the country that they shared than the actor ever did.

“I must tell you of our ride from Mammoth Cave, that ” big hole in the ground.” I shall try to relate the wonders I heard in the cavern, and describe our jog over the stones through the forest. Our guide was a bright young colored chap, who produced by his imitations of dogs, cows, etc., some fine effects of ventriloquism on our way through the cave. In pointing out to us a huge stone shaped like a coffin he would remark: “Dis is de giant’s coff-in”; then, taking us to the other dilapidated side of it : ” Dis is what he coughed out.” Then we reached what they call down there “The Altar,” where some foolish folk were married once upon a time. “De young lady swore she nebber would marry any man on the face ob the earth, so she came down yer and got married under de face ob de earth. ‘Spec’ she wanted materomony inter de groun’.” Then he would cry out, ” Hi ! John ! ” and we could hear the echo, as we thought, far away; then he would strike the ground with his staff, and we could hear a loud, reverberating sound, as tho’ all beneath were hollow, though when any of us tried it, no sound would come. He had finally to own up that he was both cause and effect. 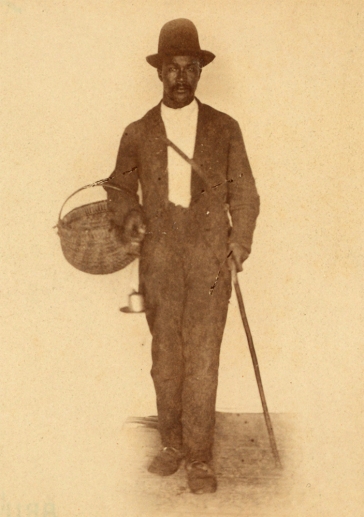 Frequently we found in different chambers in the cave crystallizations hanging from the rocky ceilings called “stalactites,” and others rising from the ground directly beneath them, reaching up and often joining the ones from above, and forming a solid pillar from floor to roof; these latter are called ” stalagmites.” William, our guide (very serious all the time), remarked that ” De upper ones was called stalac-tite ’cause dey stuck tight to de roof, and de odder ones stalag-mite — cause dey might reach the upper ones, and den again dey might n’t.” A facetious and comical darky, truly! One of these columns, or pillars, had a sort of knob on it shaped like a fat dumpling face, which is named here “Lot’s Wife.” William said, “And she has n’t done poutin’ about it yet.” So we went laughing at his weak jokes; for it was funny to us actors to see this fellow throwing his wit at us, and our appreciation of his acting made him very happy. I think I have already written about the pretty little bats that hang about the walls and roof of the cave in clusters, with heads down and mouths wide open, as if laughing in childish glee at the fun they are having in playing “upside down.”

One of the geological formations pointed out by William Garvin was the “Giant’s Coffin”. This large slab of rock, about 40 feet long resembles a huge coffin when viewed from the right angle. 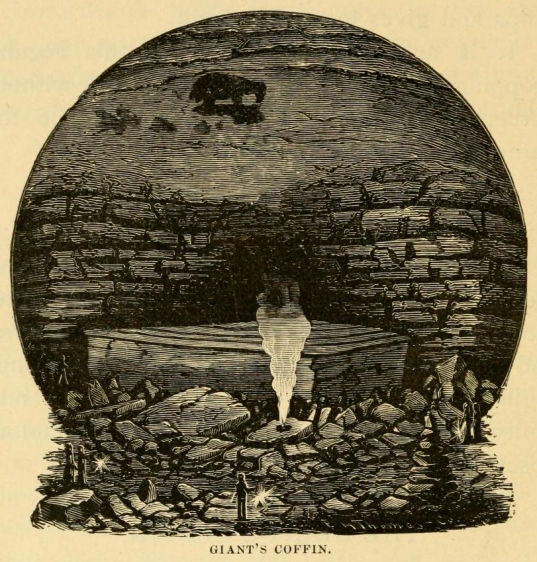 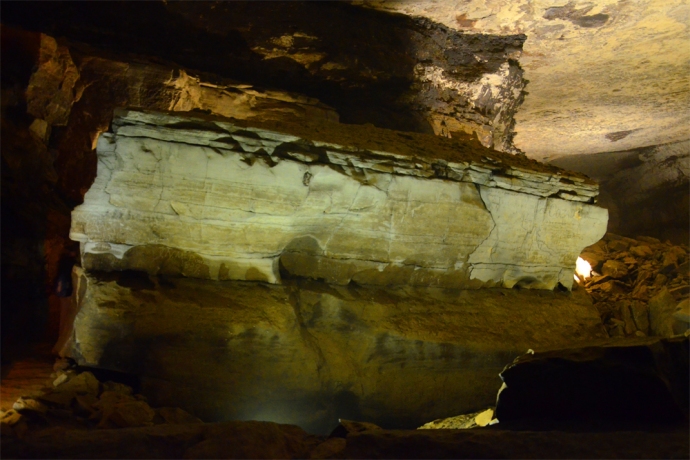 This and the other features of Mammoth Cave must have made a lasting impression on Edwin. Perhaps it was seeing these sights in person and then recounting them in his descriptions to Edwina that fueled Edwin’s desire to return. Over a year would pass, but as soon as it was convenient, Edwin made a return visit to Kentucky with both Edwina and Mary McVicker in tow.

In November of 1877, Edwin had a break of a little over a week after his engagement in Philadelphia ended and his new engagement in Cleveland was set to begin. Though it was certainly out of the way, Edwin rushed his family off to Cave City, Kentucky so that he could visit Mammoth Cave, once again. Whether Edwina was invited to join her father in exploring the cave on this trip is unknown, but I’d like to think that she was. It was, after all, a special day for the Booths. Edwin had scheduled his return visit to the cave to fall on November 13th, his 44th birthday.

Edwin revisited much of the same sites he saw in the year prior, possibly with William as his guide once again. This time, when the group of Edwin and his friends got to the “Giant’s Coffin”, Edwin enacted a plan he had thought up.

“While there Mr. Booth laid the first stone of what he hopes will become a monument to the memory of Shakespeare. The stone, weighing about two hundred pounds, was, with considerable exertion on the actor’s part, placed in position at the foot of the ‘Giant’s Coffin’ and the name of Shakespeare and the date painted on it in large white letters. Mr. Booth hopes that visitors to the cave, in the future, will each add a stone to the monument until it becomes one fitting the memory of the great author.”

Various searches have failed to come up with anything regarding a Shakespeare monument near the Giant’s Coffin, so I think it’s safe to say that Edwin’s dream never came to fruition. However, it would be an interesting piece of research to see if the cornerstone he laid and painted still exists somewhere near the coffin formation.

While Edwin Booth’s monument to Shakespeare may not stand today, he still managed to leave an indelible mark on Mammoth Cave just as the cave had left on him. According to local stories, during one of Edwin’s two trips to the cave he gave an impromptu recitation from Hamlet, his signature piece. He gave his recitation from high up on a ledge outcropping that was known as the Theater Gallery. To his few friends and the other souls who were lucky enough to be present, this was a truly unique performance by the greatest actor of the day in the most breathtaking of settings. Ever since that performance, the area in which he gave his recitation has been appropriately called “Booth’s Amphitheater” in honor of the great tragedian who enjoyed his visits to that “big hole in the ground” in Kentucky. 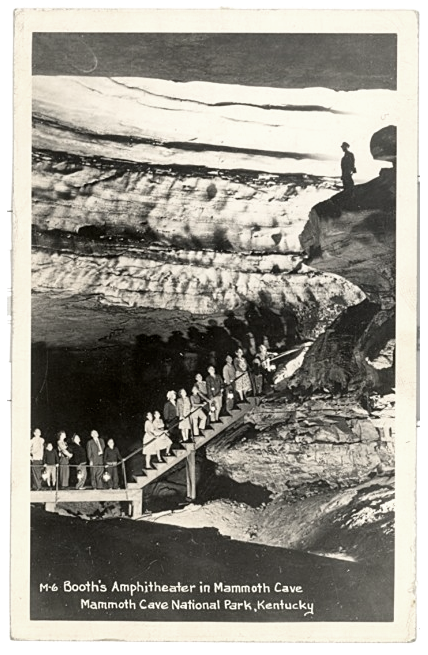 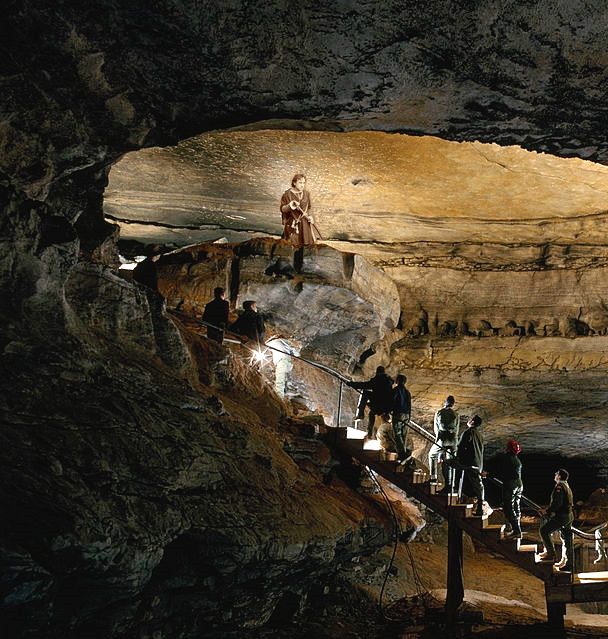 Leave a Reply to Rick B. Cancel reply