No? Well, that’s completely understandable because, despite the words on the bottom of this CDV, this image is definitely not of conspirator David Herold. However, like the false image of Mary Surratt that has been previously discussed on this site, in the wake of Lincoln’s assassination this image was copied and distributed to the general public as the likeness of David Herold. The nation clamored for images of John Wilkes Booth and his gang of conspirators and, when images were unavailable or difficult to acquire, some photographers were forced to improvise.

One of those improvising photographers was a man by the name of Anthony Berger. Berger had learned his trade from the famous Civil War photographer Mathew Brady and had even run Brady’s studio in Washington, D.C. Under Brady’s tutelage, Berger became a experienced photographer and respected artist in his own right. Berger photographed President Lincoln at least 14 times and many of the classic images of Lincoln that we revere today were taken not by Brady, but by Berger. All of the images of Lincoln that we use on our money today were the products of Berger’s work: 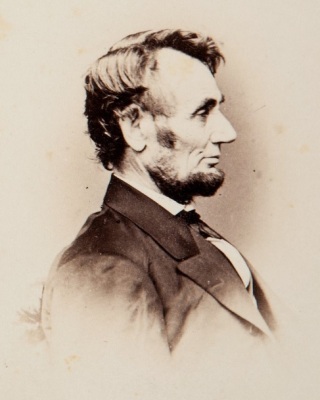 Photograph of Abraham Lincoln taken by Anthony Berger on February 9, 1864. This image was the basis for the Lincoln penny.

Photograph of Abraham Lincoln taken by Anthony Berger on February 9, 1864. This image appears on the current $5 bill.

By 1865, Berger had moved to his own photography studio in New York. This is why the above image of “fake Herold” was copyrighted in Brooklyn and not in Washington, D.C. The true identity of the man pictured in Berger’s photograph is unknown as is Berger’s reasons for attempting to pass off such an image. The most obvious reason would be financial gain with Berger knowingly passing off a fake image of Herold during a time of huge demand and in a place where no one would know the difference. Or perhaps Berger truly believed that it was an image of David Herold and, being so far away from anyone who could correct him, it was mistakenly published as such. Eventually, Berger’s false image found its way into the illustrated newspapers that were published in New York. This fake David Herold image appeared as an engraving in Harper’s Weekly on June 10, 1865: 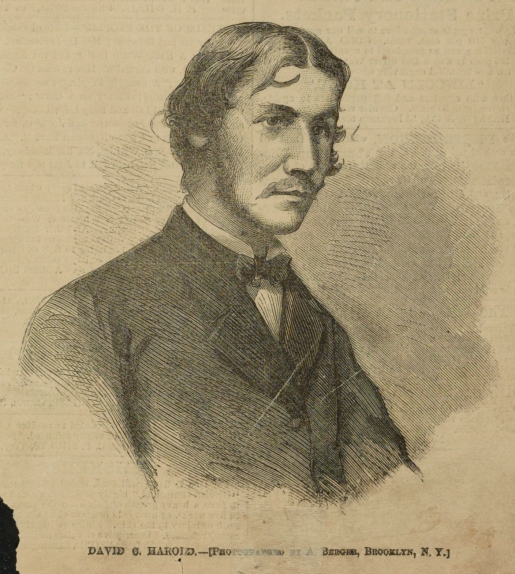 In addition to being flipped horizontally, someone took the liberty of adding a mustache to the man, a detail that does not appear on the original image. Perhaps this was done in order to fit the newspaper reports of the day which gave descriptions of the conspirators appearances. We know that Herold, like most of the conspirators, grew out his facial hair during the trial as the conspirators were rarely shaven during their imprisonment. Military commission member Lew Wallace sketched the conspirators while they were in the courtroom and his drawing of Herold also demonstrates an increase in facial hair:

By the time the execution came about we know that Herold had returned to his nearly clean shaven look:

Despite Berger’s success at getting his image published in the illustrated newspapers, it appears that the image never really became the big seller he was hoping for. Perhaps the wide publication of it in Harper’s Weekly made him, and others, aware that the image was incorrect. Just a couple of weeks later Harper’s Weekly published engravings of the conspirators based on the mug shot photographs by Alexander Gardner. Comparing Berger’s and Gardner’s photographs of Herold made it clear that Berger’s image was false.

So many errors were made in the aftermath of Lincoln’s assassination. Names were misspelled, printed biographies contained inaccurate details (like Herold having attended Charlotte Hall Military Academy), and false images were published. Some of these myths and mistakes still pop up in the present. This fake image of David Herold, like the one of Mary Surratt, is a nice visual reminder that we have to carefully sift through the reports of the past and always question the validity and reliability of the evidence. Like Abraham Lincoln once said, “Not everything you read on the internet is true”.

One thought on “The Fake David Herold”