Lincoln Borne by Loving Hands on the Fatal Night of April 14, 1865

On the evening of April 14, 1865, a 30 year-old German artist by the name of Carl Bersch was enjoying the celebratory mood that permeated the city of Washington. With General Lee’s surrender to General Grant just a few days earlier, the Civil War was effectively over. Washington had just conducted a grand illumination the night before and it seemed people were still celebrating. From his rented room on Tenth street, Bersch observed the festivities and joy that occurred around him: 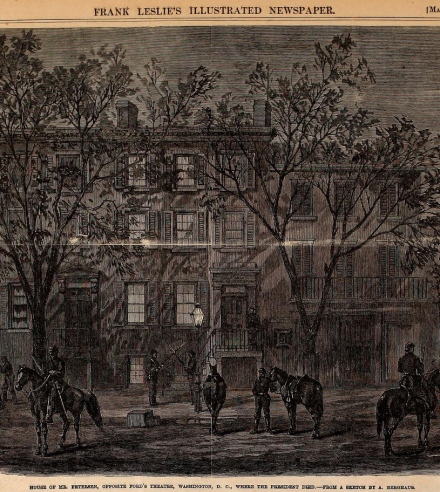 Carl Bersch’s balcony is visible on the right-hand building in this drawing from Frank Leslie’s Illustrated Weekly 5/20/1865.

“All Washington was celebrating, delirious with joy. Houses were lighted up and hung with bunting. Parades marched through the streets, waving flags and carrying many transparencies. Women with wide skirts, and wearing large poke bonnets, were about as numerous as men. President Lincoln was known to be at Ford’s Theater, so Tenth street was on the line of march. I observed no rowdyism, just a crowd of jubilant people, crazed with joy. The scene was so unusual and inspiring, that I stepped out upon the balcony in front of my windows, with my easel and sketch papers, determined to make a picture of the whole scene and transfer it to canvas. The very weirdness of the scene— aside from the historic nature of it— appealed to my artistic sense. Quickly, but very accurately, I made detailed drawings. I had more than an hour in which to do this.”

Sadly, however, a tragic act that occurred right across the street from Bersch’s residence would put an end to the jubilant atmosphere.

“Shortly after 10 o’clock a silence fell upon the surging crowd of revelers. The marching line halted. A loud cry came from a window of the theater, ‘President Lincoln has been shot; clear the street,’ soldiers and police attended to that. In the course of 10 or 15 minutes, out of the north door of the theater appeared a group of men, carrying the prostrate form of an injured man on an improvised stretcher. They stopped a few moments at the curb, hastily debating where to take the injured man to give him the best attention most quickly. They observed lights in the house, of William Petersen, my next door neighbor, and a young man, Willie Clark [sic], whom I know very well, standing on the topmost step of the winding stairs, leading to the Petersen house.  Clark [sic] was beckoning to those who had charge, to bring the injured man right in. This was done as quickly as the soldiers could make a pathway through the crowd.”

Bersch makes a mistake here in his letter written right after the assassination. The man who beckoned for the soldiers to bring Abraham Lincoln into the Petersen boarding house was not Willie Clark, but another boarder named Henry Safford. You can read more about Safford and about how Willie Clark was not even present at the Petersen House when Lincoln was there by clicking here.

Bersch goes on and notes how he was in the unique position to document this solemn occasion:

“My balcony being 12 or 14 feet above the sidewalk and street, I had a clear view of the scene, above the heads of the crowd. I recognized the lengthy form of the President by the flickering light of the torches, and one large gas lamp post on the sidewalk. The tarrying at the curb and the slow, careful manner in which he was carried across the street, gave me ample time to make an accurate sketch of that particular scene; make it the center and outstanding part of the large painting I shall make, using the sketches I made earlier in the evening, as an appropriate background. A fitting title for the picture would, I think, be ‘Lincoln Borne by Loving Hands on the Fatal Night of April 14, 1865.’ Altogether It was the most tragic and impressive scene I have ever witnessed. I am already busy with palette and brush and hope to transfer to canvas what may be one of the strangest pictures of all time.”

After finishing this letter to his family, Carl Bersch did complete his painting of Lincoln being carried across the street from Ford’s Theatre. The large format painting was kept by the family for many years. It was not until 1932 that Bersch’s daughter, Carrie Fischer, loaned the painting to the newly created Lincoln Museum inside of Ford’s Theatre. When the museum opened on February 12, 1932, the anniversary of Lincoln’s birthday, Bersch’s painting was publicly displayed for the first time. 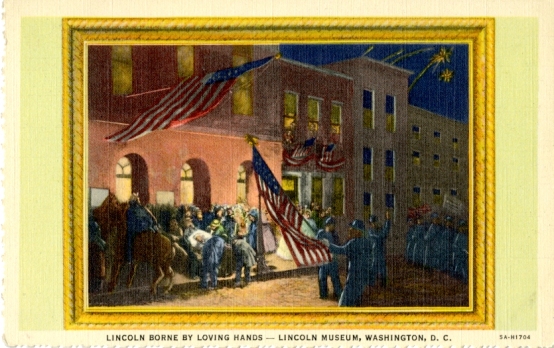 It is not known how long Bersch’s painting was on display at Ford’s Theatre the first time. It was a loan and therefore subject to the will of Bersch’s descendants who were still the owners. The ownership of the painting passed from Carrie Fischer to her daughter Gerda Vey, upon Carrie’s death in 1955. Then, when Gerda died in 1977, she willed the painting to the White House. The White House decided against keeping it but transferred it to the National Park Service instead where it ended back up at Ford’s Theatre. It was on display at some time during the 1980’s – 1990’s but, eventually, it was put into storage.

Then came 2015, the 150th anniversary of the assassination of Lincoln. Increased interest in Lincoln’s assassination motivated the National Park Service to conduct restoration on the painting for the first time since 1980. A wonderful article appeared in the Washington Post detailing the efforts to conserve this painting:

Over the many years of display the painting had accumulated dirt and grime, darkening the colors and obscuring details. The article from October 2015, spoke of the future hope to put the painting back on display at Ford’s Theatre once the restoration of the piece was done.

It appears that the restoration process has been completed and currently the museum in the Ford’s Theatre basement is being  remodeled to make room for Carl Bersch’s painting. A tweet from Heather Hoagland, the Ford’s Theatre Society’s Exhibitions & Collections Manager, shows the work that is being done to prepare a place for this large, yet meaningful painting:

Getting the basement @FordsTheatre ready for Bersch! https://t.co/XcBBLcGQzD They are moving the water fountain. pic.twitter.com/LEANj8o3jf

In the not too distant future, Carl Bersch’s “Lincoln Borne by Loving Hands” will return to the Ford’s Theatre Museum, eighty four years after its initial debut. It is a unique painting from an eyewitness to the events outside of Ford’s Theatre on April 14, 1865 and deserves to a be a fixture at Ford’s Theatre once again.

Carl Bersch was born on May 3, 1834 (year is disputed) in Zweibrücken, Germany which is located near the border with France. He originally studied theology at the University of Munich before taking up art. He came to America around 1861 and is said to have worked in Matthew Brady’s photography studio. He married his wife, Angelica Bode, in 1865. Together they had one child, Carrie. Bersch worked in Tennessee, Ohio, D.C., and Baltimore. He was a successful portrait artist in Baltimore and also briefly tried his hand at his own photography studio in the early 1880’s. Between artistic commissions he hired himself out as a German tutor. Bersch died on May 1, 1914 at the age of 80 and is buried with his wife, daughter, and granddaughter, in Baltimore’s Govans Presbyterian Churchyard.

Other work by Carl Bersch 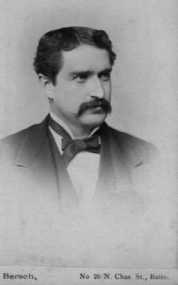 Graves of the Bersch Family (from FindaGrave.com) 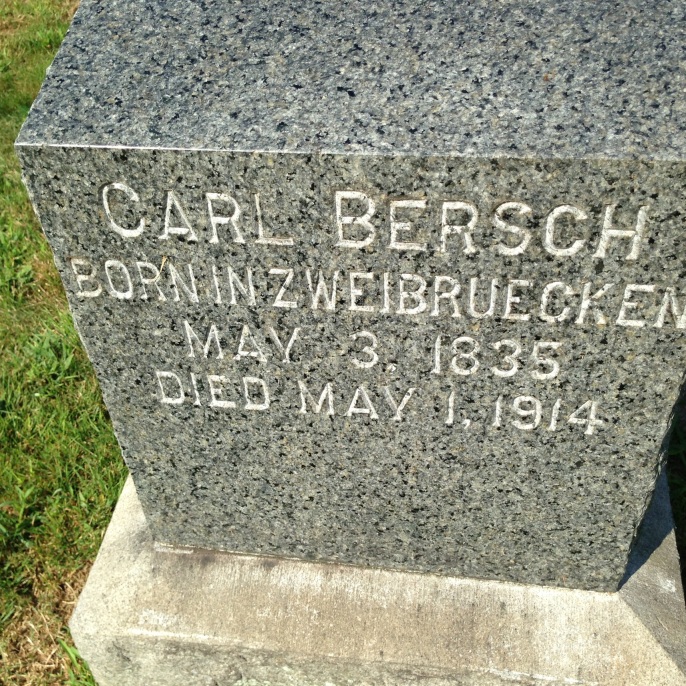 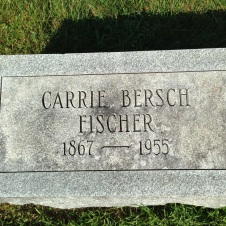 References:
Carl Bersch’s letter quoted in The Washington Star, April 16, 1932
“Lincoln assassination emerges in painting from 150 years of grime” from the Washington Post, October 5, 2015
The biographical material on Bersch comes from his obituary in the Baltimore Sun, May 3, 1914.