“I wonder, what happened with Jett, Ruggles and Bainbridge? I suppose they were arrested and confined in the Old Capitol Prison in Washington. Is it true that they never were tried, but came free after a couple of weeks after taking the oath of allegiance to the US? Have you dates of confinement and release? Thank you beforehand.”

His question refers to Willie Storke Jett, Mortimer Bainbridge Ruggles, and Absalom Ruggles Bainbridge. Ruggles and Bainbridge were cousins which explains the last names as middle names coincidence.  These three men were Confederate soldiers who ran into John Wilkes Booth and David E. Herold during their escape.

About midday on April 24th, the fugitives were at Port Conway, VA on the banks of the Rappahannock River. They were waiting for the ferry to come so they could get to Port Royal on the other side. As they waited, Jett, Ruggles, and Bainbridge came riding up.  The three men were heading towards Richmond, ultimately to get their paroles. At first, Herold lied to the men and told them that he and his wounded brother were also Confederate veterans. Thinking the three soldiers were on their way south to meet up with others in order to continue the fight, Herold pulled Jett aside and asked him if they could join them. Surprised by Herold’s desperation, especially when he and his comrades had accepted the defeat of their cause, Jett asked Herold straight away who they really were. Herold replied back, “We are the assassinators of the President”.

After more conversation, Jett, Ruggles, and Bainbridge agreed to help the men. The five men and their three horses crossed the Rappahannock on the ferry guided by ferryman Jim Thornton. When they arrived at Port Royal, Jett searched out a place for Booth to stay. He came to the home of Sarah Jane Peyton, who agreed, sight unseen, to care for a wounded solider. 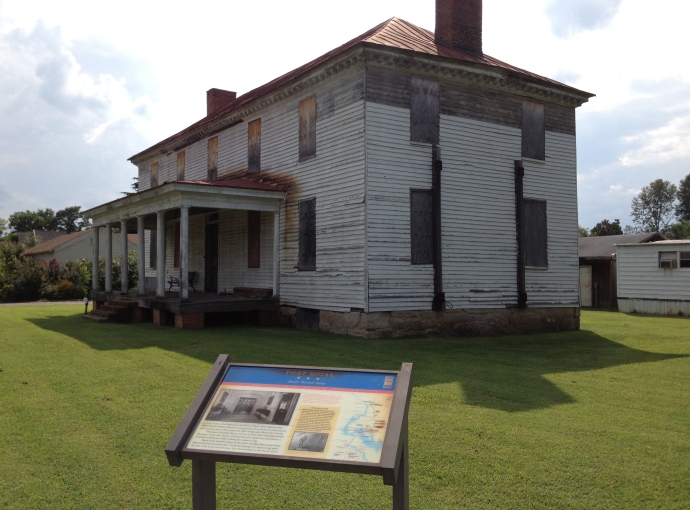 The home of Sarah Jane Peyton in Port Royal, VA

When Booth hobbled into her parlor, however, her hospitality changed. She no longer thought it proper for her to entertain a guest while her brother, the man of the house, was absent. She suggested to Jett that he might find better lodging for the wounded man a couple of miles down the road, at the farm of Richard Garrett. The three men rode to the Garrett place, with Booth and Herold sharing horses with Ruggles and Bainbridge, respectively. When they arrived at the Garrett farm, Bainbridge and Herold stayed by the outer gate as Jett, Booth and Ruggles approached the house. The Garretts agreed to care for Booth, whom Jett said was a wounded soldier named Boyd, until Jett’s return in a couple of days. Jett, Ruggles, Bainbridge, and Herold rode further south. They stopped at the Trappe, a house of entertainment, before separating for the evening. Jett and Ruggles went to the Star Hotel in Bowling Green. Jett was courting Izora Gouldman, the hotel-keeper’s daughter.  Bainbridge and Herold traveled to the home of Virginia Clarke. Coincidentally, both Bainbridge and Herold knew Virginia’s son James and were welcomed into her home for the night.

The next day, Bainbridge and Herold met back up with Ruggles, likely in Bowling Green. The three men rode back to the Garrett house where Booth had comfortably spent the night in an upstairs bedroom. Bainbridge and Ruggles dropped Herold off and then continued on to Port Royal. When they arrived, they found a troop of Union cavalry crossing the ferry from Port Conway to Port Royal. They turned around and put spurs to their horses. They rushed back to Booth and Herold at the Garrett farm long enough to tell them of the approaching troops, then they continued quickly south.

The rest is well-known. The Union troops learned from one of the residents of Port Conway that Willie Jett was among the men who crossed with John Wilkes Booth. What’s more, they learned of Jett’s affinity for Izora Gouldman. Unknowingly, the troops rode right past the Garret farm where Booth was hiding on their way to Bowling Green. They captured Jett at the Star Hotel and he agreed to take them to the Garrett farm. When the troops arrived, they kept Jett under guard near the gate of the farm while the rest surrounded the house and barn. Eventually Herold surrendered himself and the barn was lit on fire to smoke Booth out. Boston Corbett fired at Booth inside of the burning barn, paralyzing him. Booth was dragged from the barn, first placed under a tree and then on to the front porch of the house.  He died around dawn on April 26th.

During the lengthy crossing of the soldiers on their way back across the Rappahannock after killing Booth, Detective Luther Baker took possession of Booth’s body and the prisoner Jett. With two other soldiers, Baker departed Port Conway ahead of the rest of the troops. At some point during their travel to Belle Plain, where a steamboat would take them up to Washington, Baker let Willie Jett go. Jett had led the soldiers right to the assassin without a fight, and Baker did not believe there was any need to detain him further. When Baker got back to Washington, he was severely berated by Edwin Stanton for releasing Jett without authorization. An arrest order for Jett was quickly sent out:

Jett was re-arrested in Westmoreland County, VA on May 1st. He was transferred to Washington and imprisoned at the Old Capitol Prison with the other Lincoln assassination related suspects. On May 6th, he gave a lengthy statement to the authorities about his interaction with Booth, ending it with the assurance, “I have tried to evade nothing. From the beginning I have told everything.”  Jett was also called to testify at the trial of the conspirators, giving his testimony on May 17th.  Willie Jett was imprisoned for a month and was released on May 31st when he took an oath of allegiance at the Old Capitol Prison: 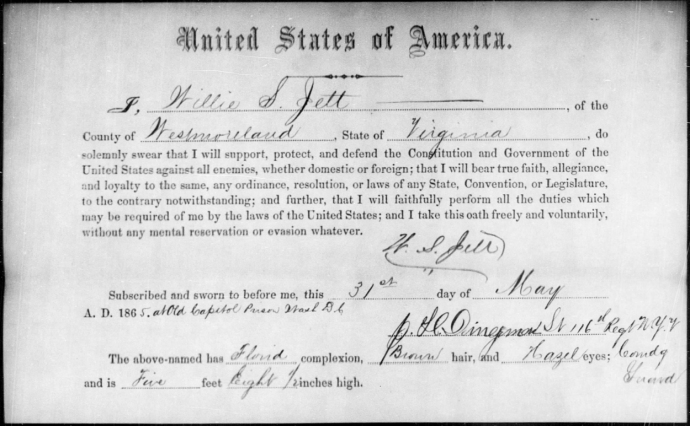 Though Jett had been a major player in the escape of John Wilkes Booth, he was not tried as a conspirator since he had never met Booth prior to April 24th and Jett had also assisted in Booth’s capture.  The government was only concerned with prosecuting those they believed had real knowledge of the conspiracy before it was carried out.  Jett did not fit this criteria.

In January of 1890, an account written by Lieutenant Ruggles was published in The Century Magazine. Not all of the details in Ruggles’ recollections almost 25 years after the fact are correct, but he does give this account of what happened to him and Bainbridge:

“Learning that Jett was a prisoner, and that we were to be arrested, tried, and hanged, as aiders and abetters, Bainbridge and myself stood not on the order of going, but went at once. Making our way into Essex County and crossing to Westmoreland, we went to our home up in King George County. Some ten days after, I was arrested at night by a squad of United States cavalry. Bainbridge was also captured. We were taken to Washington and placed in the Old Capitol Prison. We were not alone in our misery, however, for Dr. Stewart, at whose house Booth had stopped, William Lucas, the negro who had driven him to the ferry, and a number of others, were there, among them being Jett, who had escaped from Captain Doherty, and had been recaptured at his home in Westmoreland County.”

Lieutenant Ruggles was arrested in King George County either on May 2nd or May 3rd (both dates are given on two different records).  Private Bainbridge was arrested in King George County on May 4th or 5th (again two different dates on two different records).  They were both transported to the Old Capitol Prison and were incarcerated there starting on May 5th.  For some unknown reason (Ruggles thought it was by mistake), the two men were transferred out of the Old Capitol and sent all the way to Johnson’s Island, a prisoner of war camp for Confederate prisoners located near Sandusky, Ohio.  They left the Old Capitol Prison on May 11th and arrived at Johnson’s Island on the 13th.

It didn’t take very long for those in charge at Johnson’s Island to determine that these two men were much more than your average prisoners of war.  It certainly looks like their transfer to Johnson’s Island was a mistake because, on May 15th, Ruggles and Bainbridge were being transferred back to D.C.  They arrived at the Old Capitol Prison on May 17th and this time they stayed there.

Neither Ruggles or Bainbridge were ever called to testify at the trial of the conspirators.  On June 3rd, both men were released from their confinement after taking the oath of allegiance:

Willie Jett never ended up marrying Izora Gouldman of the Star Hotel.  Instead he moved to Baltimore, married, went insane (possibly because of untreated syphilis), and died in an insane asylum in Virginia.  His body is buried in Fredericksburg.

After the war, Mortimer Bainbridge Ruggles and Absalom Ruggles Bainbridge continued to imitate each other.  Both men married and had two children.  Both moved to New York.  Both found occupations that forced them to move around; Ruggles as a traveling salesman and Bainbridge as an interior decorator.  Finally, both men died not only in the same year, but in the same month.  These two Confederate veterans are buried in two different cemeteries in New York:

While Jett, Ruggles, and Bainbridge spent a bit more time imprisoned than some of the other suspects in Lincoln’s assassination, their incarceration could have been longer, especially since it was known that they had contact with Booth and assisted him during his escape.  Booth’s brother, Junius Brutus Booth, Jr., who knew nothing about the assassination, was imprisoned until June 22nd.  John Lloyd, the man who gave Booth and Herold a carbine, field glasses, and some whiskey at the Surratt Tavern, wasn’t released until June 30th.  One of the last people released from the Old Capitol Prison was Joao Celestino, the Portuguese ship captain whose ill-timed threats against William Seward made authorities believe he was a main conspirator.  Celestino was released from the Old Capitol Prison on July 8th and was ordered to leave the U.S. within 10 days, never to return.  And, of course, Dr. Mudd, Edman Spangler, Samuel Arnold, and Michael O’Laughlen were imprisoned at Fort Jefferson for three and a half years before the surviving three were pardoned in 1869.

The imprisonment endured by Jett, Ruggles, and Bainbridge could have certainly been worse had the government truly wanted to punish all those who assisted John Wilkes Booth.

18 thoughts on “Jett, Ruggles, and Bainbridge”