For a third time, I have inadvertently run into the name of Edwin Pitts, the Chief Clerk of the Judge Advocate General’s Office in the War Department. It appears, from photographs, that among Mr. Pitts’ duties were to attend to and show interested parties the relics of the trial of the Lincoln assassination conspirators. Twice I have highlighted images of Mr. Pitts holding Booth’s derringer:

In addition to the anonymous photographers above that wished to see the trial exhibits, Edwin Pitts also apparently showed the relics to at least one author of an assassination book. Upon the completion and publication of his book, Philip Van Doren Stern sent Edwin Pitts an autographed copy of his book, The Man Who Killed Lincoln.  The War Department replied to the gift with the following sad letter:

This office is in receipt of an autographed copy of your book entitled “The Man Who Killed Lincoln”, addressed to Mr. Pitts.

I am very sorry to advise you that Mr. Pitts died of lobar pneumonia on December 12th last after an illness of two weeks.

The book and your letter to Mr. Pitts will be turned over to his widow upon her return from Florida where she has gone for recuperation.

I don’t know how long Edwin Pitts was employed in the JAG office, but from the above pictures it appears that this civil servant died a bit before his time.  Au Revoir, Mr. Pitts and thank you for keeping an eye on the assassination relics during your tenure.

EDIT: Thanks to the wonderful memory of researcher Wesley Harris, an expert on the weapons used by the conspirators, here is another piece of evidence of Mr. Pitts’ employment at the War Department.  The following letter is to a Miss. Lenigan who apparently asked what items were in the possession of the War Department in 1936.  This list was sent to her by E. B. P. or Edwin B. Pitts: 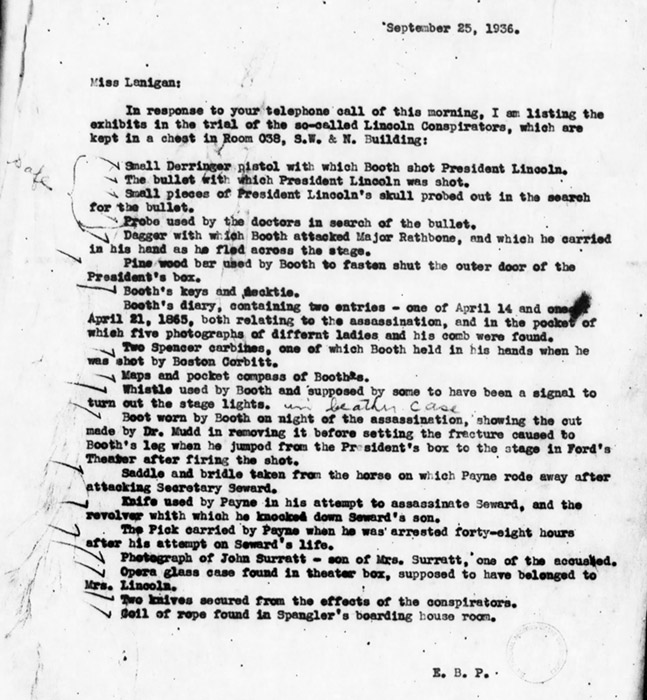 Not all the items in the above list are correctly identified, though. The biggest one would be Powell’s knife which was not in the posession of the JAG’s office since it was given to Private George Robinson in 1867. Still it’s clear that Mr. Pitts was the go to person in the JAG’s office when it came to the relics of the conspirators.