The Assassination in Comic Books

The assassination of Abraham Lincoln at the hands of John Wilkes Booth was a defining moment of American history.  It was a national tragedy the likes of which we had never experienced.  It turned Lincoln into a martyr and changed the course our country would take after a devastating Civil War.  For this reason, the assassination of Abraham Lincoln has become perfect fodder for the imaginative minds of comic book writers.  Through this artful medium, Lincoln’s assassination has been remembered, revised, and completely reinvented to match the worlds in which superheroes like Superman, Batman, The Flash, and others exist.  Most references to the assassination in comic books are brief but a select few have devoted serious attention to America’s great drama of April 14th, 1865.

Several comic books briefly mention the assassination of Abraham Lincoln as it occurred.  Occasionally, the main character is somehow thrown back through time or enters a parallel world to witness it.  They may interact in the narrative, but the ending is still the same.

While reminding us all of the past is nice, it isn’t very superhero-y.  More often, the death of President Lincoln is averted due to the help of a hero, or because this is a parallel world where his assassination never occurred in the first place. 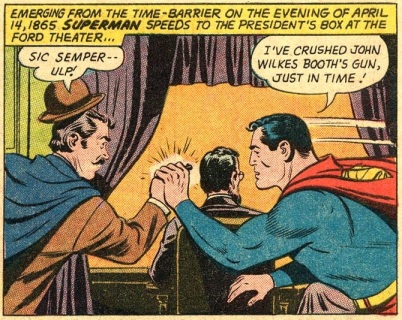 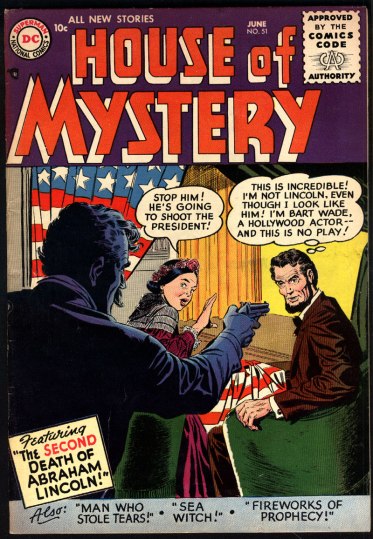 In these versions, the normal history is changed drastically for the comic book world.

As entertaining as that rendition is, however, my favorite incarnation of the assassination of Abraham Lincoln in the comic book realm is this 1971 issue of The Flash:

From what I can gather from sources online, the Flash travels forward in time to the year 2971.  He enters a world which once contained a united Earth.  However a dispute has broken out between Earth East and Earth West and there is Civil War once again.  The beginning of the comic leads with a future Lincoln getting disintegrated by a future John Wilkes Booth. 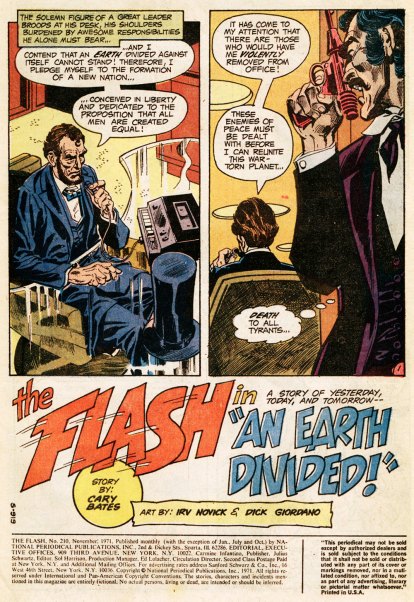 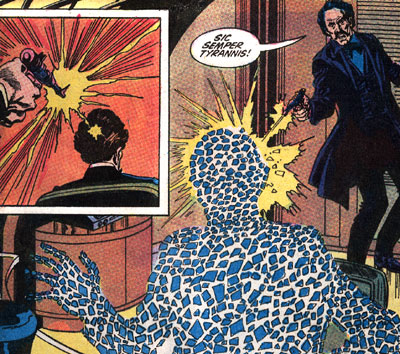 The Flash is rightly confused by how this is possible.

It turns out the future scientists created a robotic Abraham Lincoln to lead them through the Civil War.  He contained Lincoln’s wit and wisdom, and also the ability to calculate the consequences of people’s actions. 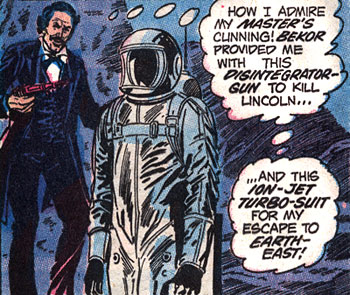 The Flash chases after him, but gets trapped when Booth ties him up with a future chain that squeezes him harder and harder.

Booth jets off again to meet his master, an evil mastermind named Bekor.  He turns over the murder weapon he used to kill Lincoln to Bekor.  Bekor betrays Booth and shoots him with the disintegrator.  Bye Bye, Booth.  When Bekor kills Booth though, Robot Abraham Lincoln remerges out of the gun.  Apparently, using his robot brain, Lincoln predicted someone would try to take his life.  So he carried around his anti-disintegrator pocket watch. 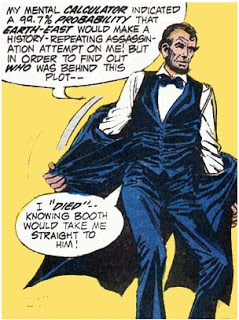 He turns the table on Bekor using his good old fashioned wrestling skills. 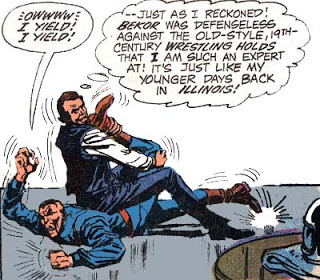 By then, The Flash has managed to escape the squeezing chains and rushes to Bekor’s lair.  He manages to get Lincoln out of the lair before it self-destructs.  Lincoln continues as President of Earth, using his 19th century wisdom to lead this troubled, 30th century world.  This is a fun and entertaining reinvention of the assassination of Lincoln.

There are many other comic books that include references to the assassination of Abraham Lincoln with more coming out every year.  As long as Abraham Lincoln continues to be an important part of the American story, his death will continue to find a place within their multicolored pages.

12 thoughts on “The Assassination in Comic Books”