In 2012, I moved from my home state of Illinois (The Land of Lincoln) to Maryland. I had been teaching in Illinois for two years and enjoyed it, but managed to get a job at an elementary school in St. Mary’s County Public Schools in Southern Maryland. The appeal of being able to live in the same area as the history that so fascinates me was almost all the encouragement a 24 year-old Dave needed to move across the country. And I have never once regretted the decision of leaving my family behind to embrace my passion. For the past nine years, I have been able to do so many things and explore the Lincoln assassination story in ways I could never have imagined. I’ve camped out in the woods that John Wilkes Booth passed through during his escape, given tours at the room where the trial of the conspirators happened, been interviewed on live TV and radio talking about the Lincoln assassination story, spent a night at the Booth family home, and, my favorite activity of all, I’ve taken 20 busloads of people down the John Wilkes Booth escape route tour for the Surratt Society. Being in Maryland has helped shape me as a historian and an educator.

With that being said, our priorities in life can change quickly sometimes. At the beginning of 2021, I was a recent divorcee who was asked to be interviewed on Vanished –  a podcast that was investigating the “Booth escaped and got turned into a mummy” conspiracy theory. The cohost assigned to me was Jen Taylor (no relation) and we had a great time essentially shredding the conspiracy theorists’ so-called evidence that a different man was killed in Booth’s place on April 26, 1865. After the podcast wrapped up, Jen and I continued to find excuses to talk to one another. One day, Jen had to take a long drive and decided to call me so that I could keep her company on her trip. We talked on the phone during her entire car ride, and after she got back home, and further into the night. Before long, I heard birds chirping and saw the sun was rising. We had talked for over 9 hours straight! Since then, I’ve talked and videochatted with Jen everyday. When my spring break from school came in March, I cancelled my planned trip to Fort Jefferson, to fly out to Austin, Texas to see her and her two amazing boys in person.

We both quickly realized that we had found our person and that we loved each other. It came fast and without warning but we knew that everything we’d experienced had been designed to lead us to each other. We had both been in bad marriages before and that’s how we knew we had finally found the selfless and committed partners we both deserved. Since March, I’ve flown out to Austin every other weekend. Eventually, Jen was able to make a trip to Maryland to see my neck of the woods. While taking Jen on part of the John Wilkes Booth escape route in May, I proposed to her on the banks of the Potomac at the spot where John Wilkes Booth and David Herold tried to cross.

We are in the midst of planning a wedding for next year in Granbury, Texas – the same town where the John Wilkes Booth imposter, John St. Helen, lived and allegedly confessed his identity to Finis Bates. In essence, Granbury is the birthplace of the “Booth escaped” theory and, if it wasn’t for that town and its notorious inhabitants spinning some yarns, Jen and I would never have met. I used to avoid the Booth escaped theory like the plague because it was so nonsensical, and now it’s a key part of my marriage origin story.

I’m happier now than I’ve ever been. I can’t wait to start my life with Jen and her boys. I have a family waiting for me in Texas. Today was my last day at St. Mary’s County Public Schools and in two weeks (on the anniversary of the conspirators’ execution as a matter of fact) I will be leaving Maryland for good. I have truly loved living in such close proximity to the Lincoln assassination sites (and cemeteries) for the past nine years, but what I will miss most of all are the many wonderful friends I’ve made here in Maryland. I will sincerely miss you all, but my future is with my wife and stepsons in Austin.

Now before you worry too much, this does not mean I’m going to stop researching, writing and speaking about the Lincoln assassination. Quite the opposite. In fact, I’m hoping to increase my output here in LincolnConspirators.com once I finish my Master’s degree in American history at the end of the year. I already have ideas for my thesis and am hoping it can turn into either an interesting feature here on the site or maybe, possibly, a book. In addition, Jen and I are planning to make a podcast series focused on the trial of the Lincoln conspirators. 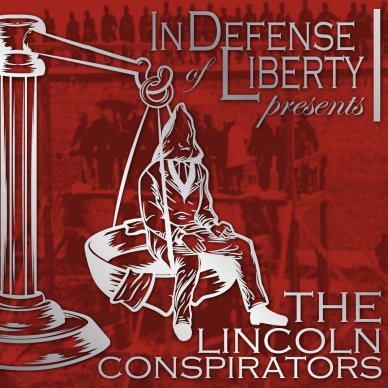 In terms of talks and speeches, I’m planning on coming back to Maryland for the annual Surratt Society Conference, my talks at Tudor Hall, and other special events. My favorite thing in the world is narrating the Surratt Society’s John Wilkes Booth escape route bus tours and you better believe that I will fly back as often as they want me to get my fix. In addition, COVID has introduced us all to the virtual meeting and Civil War Roundtables. I am always available to do online and Zoom lectures to different groups.

In many ways, things will stay the same here on LincolnConspirators.com, I just won’t be living in Maryland anymore when I write about these things. At times I may have to reach out to the locals to go and snap a picture of a grave or something, but when I started this site I was living in Illinois so I know I can still do good research from afar. In the interim between posts, I still highly recommend you follow me on Twitter as I am always tweeting and retweeting Lincoln assassination material over there.

I’d like to thank you all for your continued support as I travel to a new state to start this new chapter in my life with Jen and her boys. You can take the Lincoln assassination researcher out of Southern Maryland, but you can’t take the Southern Maryland out of the Lincoln assassination researcher. To my local friends and students, take care of this state (and its graves) for me. Don’t worry, I won’t be a stranger.

67 thoughts on “A New Chapter”