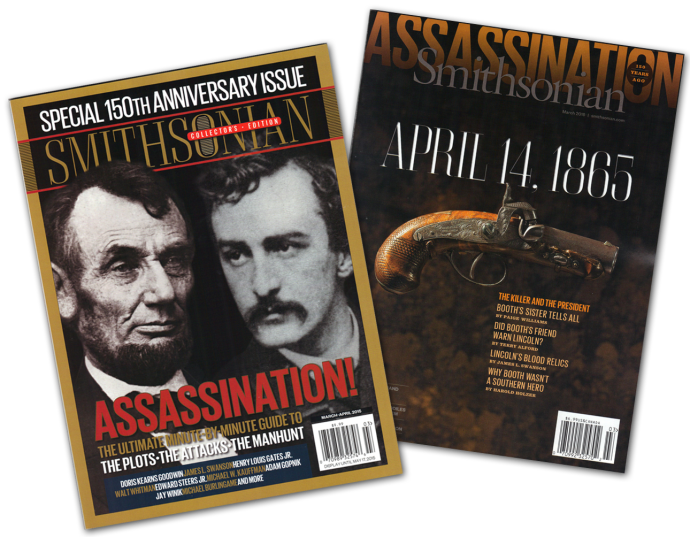 In recognition of the 150th anniversary of the assassination of Abraham Lincoln, Smithsonian has published two different editions of their magazine with articles relating to the event.

The normal, March 2015, subscriber issue of Smithsonian Magazine features the image of Booth’s derringer on the cover.  Contained in this issue are four articles about different aspects of the assassination.  These articles can be read online through the Smithsonian website:

The second magazine is a special collector’s edition devoted entirely to the assassination story.  This is a stand alone issue featuring images of Abraham Lincoln and John Wilkes Booth on the cover.  It contains articles by noted authors Michael Kauffman, Edward Steers, Jr., James Swanson, Asia Booth Clarke, Lloyd Lewis, Jay Winik, Doris Kearns Goodwin and more.  Many of the articles are edited excerpts from the books by the different authors, but the magazine still provides a multifaceted look at the story and impact of Lincoln’s assassination.  The edition is thoroughly illustrated with period images and with the work of several modern artists.  One of my favorite illustrations in the magazine is this “assemblage” image of the conspirators by artist Polly Becker.  It is somewhat reminiscent of the original “Ring of Conspirators” image from Benn Pitman’s edition of the trial: 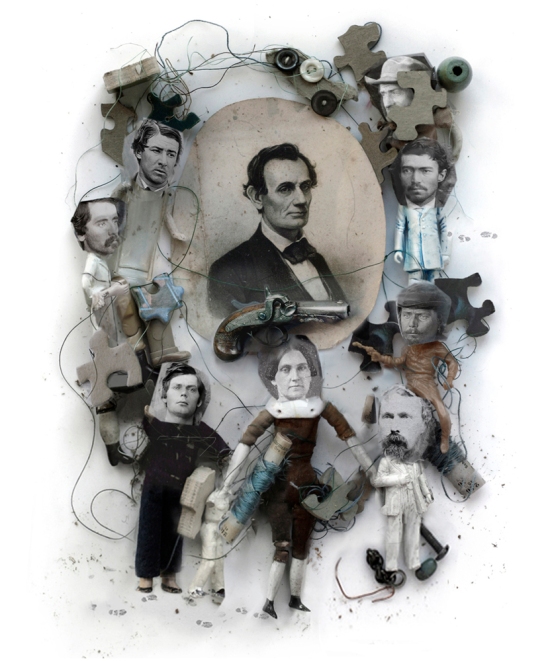 Sadly, the articles contained in this special collector’s edition of the Smithsonian Magazine are not available to read online.

Both of these magazines are currently on sale at newsstands and bookstores.  Attendees of this year’s Surratt Conference on March 21st, will also be able to purchase copies of these magazine there.  Time, of course, is limited to acquire both of these magazines.  The normal March issue featuring Booth’s derringer will be replaced by the April issue in less than a month’s time, and the special collector’s edition has a note to newsstands to only display it until May 17th.

In the spirit of my previous giveaway of the book, John Wilkes Booth: Day by Day by Art Loux, I am offering a free copy of both of these magazines to one lucky commenter on this blog.  Given the many authors involved in producing these magazines, I thought it would be fun to have you all discuss your favorite Lincoln assassination book.

Therefore, if you would like to win a free copy of both, the March 2015 issue and the special 150th anniversary issue of Smithsonian Magazine, all you have to do is leave a comment on this post describing what book on the Lincoln assassination is your favorite and why.  In one week’s time, on March 7th, I will pick one of the commenters at random to receive a free copy of these two magazines.

So get commenting below for your chance to win a free copy of these assassination editions of Smithsonian Magazine courtesy of BoothieBarn.com. The contest is now over. You may continue to comment, but any new comments will not be entered into any drawing.  Thank you all for participating.

Contest Rules: To win a copy of a.) the March 2015 issue of Smithsonian Magazine and b.) the “Special 150th Anniversary Issue” of Smithsonian Magazine, you must write one (1) comment on this post describing your favorite book on the Lincoln assassination and why it is your favorite. A valid email address must be attached to the comment in order to win. Multiple comments from the same person will be counted as one entry.  Contest will end on March 7, 2015 at 20:00 EST.  The winner will be notified via email.  If no response is received within three (3) days, a new winner will be chosen.  In the event that the winner chooses to forfeit the prize, another winner will be selected.  Winners agree to have their name and comment used in a future post.