The Memorials on Tenth St.

Today, Ford’s Theatre and the Petersen House across the street constitute the “Ford’s Theatre National Historic Site”.  Operated by the National Park Service in partnership with the Ford’s Theatre Society, both buildings exist for the purpose of educating the public about Lincoln’s last hours.  Standing as they are today, it is sometimes difficult to imagine that, historically, they have not always been dedicated to serving Lincoln’s memory.  In fact, it was not until several years after Lincoln’s death that an effort was made to commemorate these buildings in anyway.  The modern museums of Ford’s Theatre and the Petersen House started off quite humbly as mere memorial plaques.

While the site of Lincoln’s assassination and the house in which he died were well known and hardly forgotten sites of Washington history, there was no move to commemorate either one of the buildings until nearly 14 years after the Great Emancipator’s death.  The first building to receive some sort of physical recognition was the Petersen House.  In 1879, it was the home of lawyer and newspaper publisher, Louis Schade.  You can read more about Mr. Schade and his connections to the assassination story HERE.  Schade had bought the Petersen House from the Petersen heirs in 1878.  In August of 1879, a couple of newspaper articles announced the installation of a marble tablet on the exterior wall of the Petersen House commemorating the historic nature of the house:

As reported, the tablet was created and put up by a private citizen, Charles Rousseau.  Mr. Rousseau was a Belgian native who learned the art of sculpture at the Royal Academy of Fine Arts in Brussels.  He made his living carving tombstones and was quite talented at it.  One of Charles Rousseau’s creations is this tombstone for Benjamin Grenup, believed to be the first Washington, D.C. fireman to have been killed in the line of duty when he was run over by the fire wagon:

Whether Mr. Rousseau took it upon himself to make a tablet for the Petersen House, or whether Schade commissioned it, is not known.  Regardless, the tablet with its gold lettering was installed high on the exterior wall, far out of reach.  Here is a picture of the Petersen House as it appeared when Schade lived there as published in John E. Buckingham’s 1894 book, Reminiscences and Souvenirs of the Assassination of Abraham Lincoln: 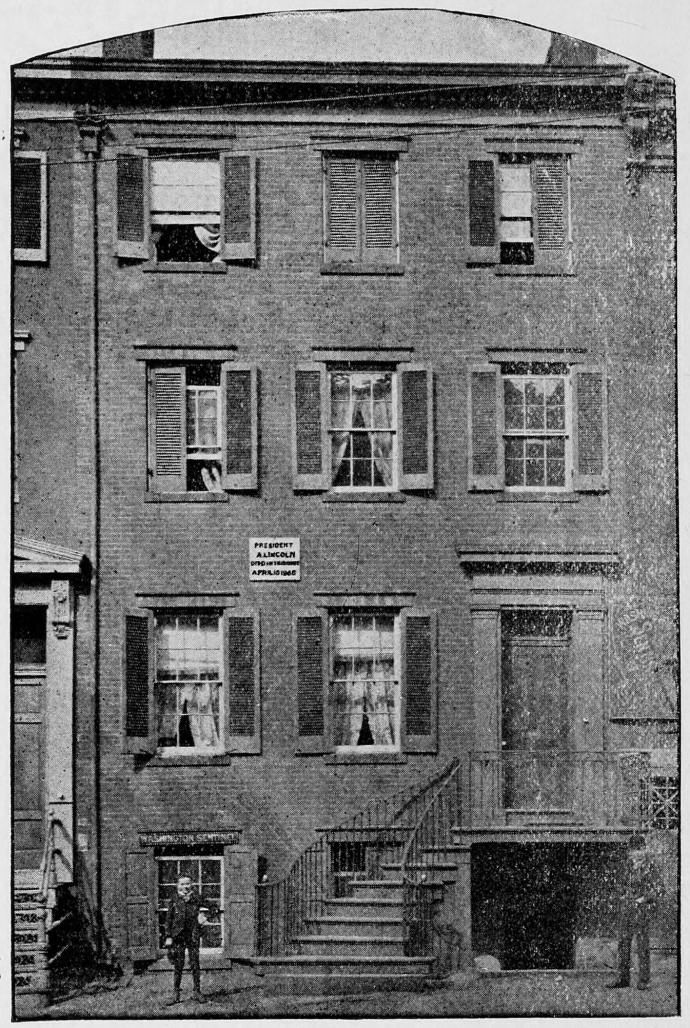 In the image, Buckingham retouched the tablet to make lettering readable:

This marble tablet remained the only marker on the site for many years.  After the house was sold by Schade to the federal government in 1896, Osborn Oldroyd became its curator and started displaying his Lincoln collection inside.

As time went by, the small marble tablet began competing with Oldroyd’s large signs hawking admission to the house to see his collection. 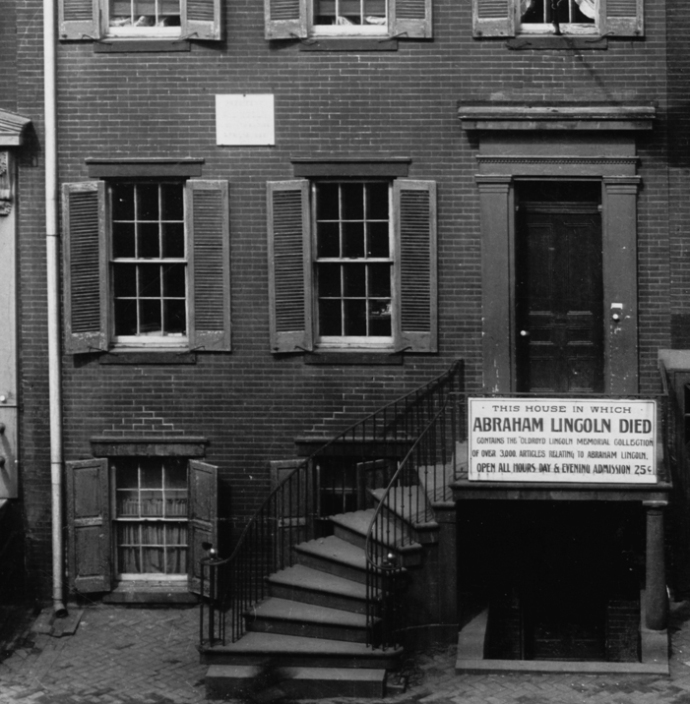 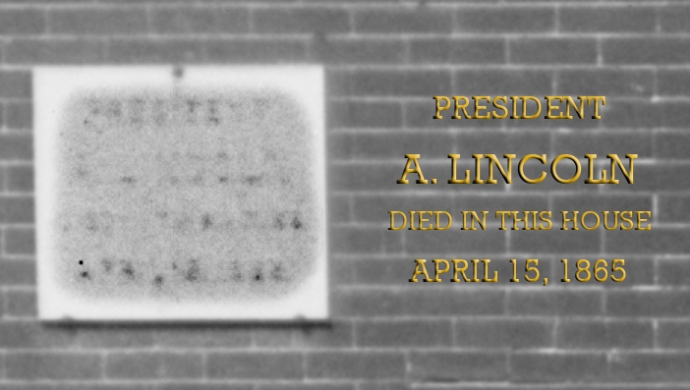 However, by 1909 the marble tablet was no longer on display.  Photographs during this time only show the three holes and the discoloration of the bricks from where the tablet had hung for so many years.

Whether Rousseau’s tablet fell or was purposefully removed is unknown. One text states that the tablet was removed because of complaints from visitors who stated it was placed too high up on the wall to read easily. If this is correct, perhaps Oldroyd felt his large museum signs provided the necessary information. Regardless, for a time in the early 1900’s, the only memorials on the Petersen House were the advertising for the Oldroyd collection of Lincolniana.

Meanwhile, across the street, the edifice that witnessed the horrible crime of April 14th, 1865, remained bare of any memorials. No private citizen had adorned the exterior wall of “Old Ford’s Theatre” like Charles Rousseau had done for the Petersen House. Instead, the building had been transformed into an office building, suffered a tragic collapse of the interior in 1893, and talks of demolishing it reappeared every few years or so in the press. Through it all, however, the scene of the crime remained.

It was not until 58 years after the death of Abraham Lincoln that a group of citizens decided it was time to commemorate the site of Lincoln’s assassination. The group, established by the Commissioners of the District of Columbia, was called the Citizens Committee of Historic Sites. With the help of the commissioners, the committee appealed for funds from Congress for the, “erection of suitable tablets to mark historical places in the District of Columbia”. For several years the committee was appropriated $500 and placed bronze plaques at various sites in D.C. On February 28, 1923, their appropriations were renewed and the committee started the design of two new plaques. One plaque was going to take the place of Rousseau’s marble tablet on the Petersen House while the other was to be placed on the long neglected Ford’s Theatre.

The formal unveiling of the new plaques occurred on April 29th, 1924.  I quote from the 1925 book, Abraham Lincoln in the National Capital by Allen C. Clark:

The exercises began at 3 o’clock in the afternoon. The invocation was by the Rt. Rev. Mongr. Cornelius F. Thomas. A History of the Ford Theatre Site was presented by Allen C. Clark. Eloquent addresses were made by the Hon. Henry R. Rathbone and by Frederick L. Fishback, Esq., of the Washington Bar. Mr. Rathbone vividly described and minutely, the scene of assassination. Mr. Fishback touchingly told of the last hours and of the funeral journey to Springfield. The tablet on the Ford Theatre site was revealed by Miss Maud Burr Morris; and Mrs. Osborne H. Oldroyd drew the cord which held the drapery to the tablet on the house where Lincoln died. It was the American flag which draped the tablets. The band from the Military School under the direction of Prof. W. J. Stannard interspersed selections. Frederick D. Owen was in charge of arrangements. Allen C. Clark presided.

As mentioned in the above quote, one of the speakers at the ceremony for the plaques was Representative Henry Riggs Rathbone.  Rep. Rathbone’s father was Henry Reed Rathbone, the army Major who was present in the box when Lincoln was assassinated.  Though the exact details of what he stated do not appear to have been recorded, the ceremony was attended by over 200 people. 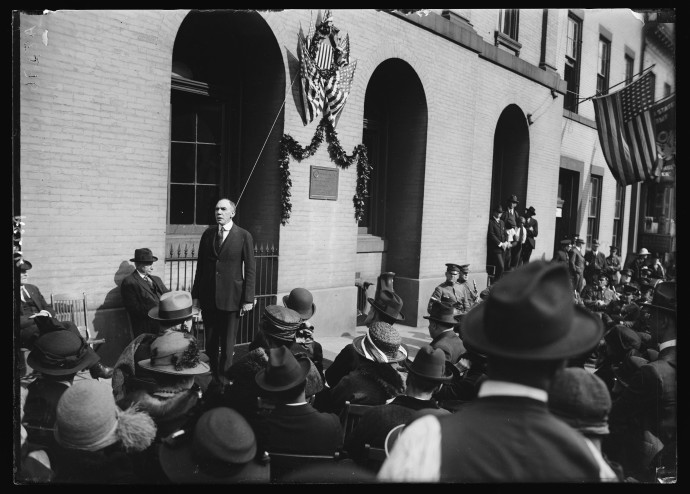 Rep. Henry Riggs Rathbone speaking at the unveiling of the memorial plaques on Ford’s Theatre and the Petersen House on April 29, 1924. Click to greatly enlarge. LOC

The plaque that the Committee of Historic Sites placed on the Petersen House still stands on the house today.  It is located at a much more readable level than its predecessor, now hanging between the basement and first floor.

The plaque on Ford’s Theatre hung on the exterior of the building for many years, marking the location of the great crime of ’65.

In the early 1960’s public support swelled to restore Ford’s Theatre to its former glory as a working theatre and a Lincoln museum.  During the periods of restoration and construction the plaque was taken down for obvious reasons. 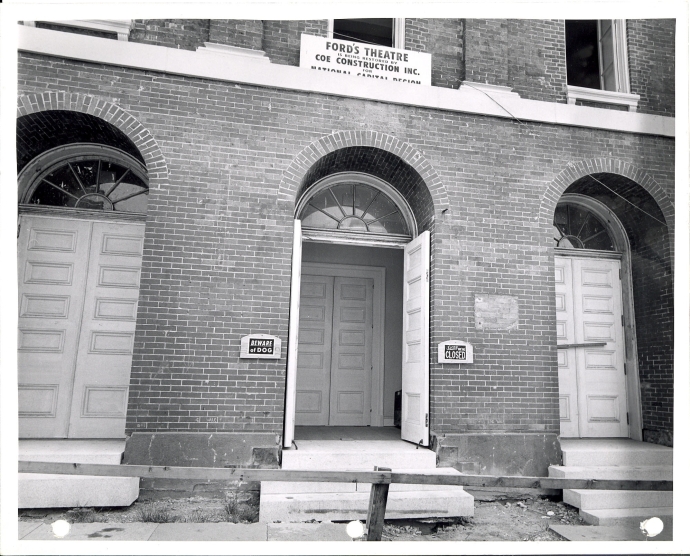 When the newly restored Ford’s Theatre was unveiled in 1968, the plaque hung by the Committee of Historic Sites in 1924 was not restored to its place.  While the exact location of the Ford’s Theatre plaque is not known to this author at this time, it is likely that it entered the collection of the National Park Service and is being safely stored away.

The historic nature of a location is rarely appreciated in its time.  In most instances, plaques are markers to note where something historic once was but is no longer.  For many years it was a strong possibility that Ford’s Theatre or the Petersen House could be sold and torn down.  If events had played out differently, the magnificence that is Ford’s Theatre or the emotional impact that is the Petersen House would have been reduced to raised lettering on a piece of bronze.  We are fortunate that the generations that came before us had the forethought to preserve and protect these sites so that they may be enjoyed today.  Still, we also must remember that, like Rome, the structures we respect were not built in a day. The glorious museums on Tenth St. were founded on the actions of private citizens like ourselves and some memorial words on a tablet.

6 thoughts on “The Memorials on Tenth St.”