All Under One Roof

Thank you to Art Loux for sharing this interesting census record from 1860 with me.  It shows a rare instance in which practically all the members of the Booth family are living under one roof.  The only missing family members are the deceased Junius, Sr. and the living Junius, Jr. who resided in California. 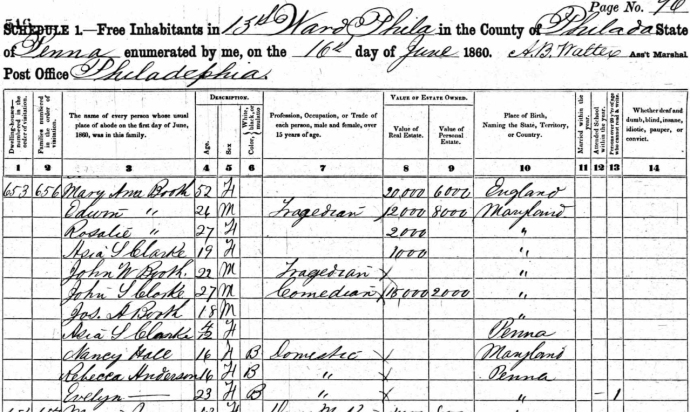 The home in Philadelphia that all the Booths were living in was the home of John Sleeper Clarke and Asia Booth.  The two had been married the previous year.  In June of 1859, about two months after their marriage, Mary Ann Booth moved in with the newlyweds.  Joe and Rosalie followed her shortly thereafter.  When this snapshot was taken Edwin, John Wilkes, and John Sleeper Clarke were all briefly home due to the completion of the acting season.  The summer heat made a crowded theater an unbearable affair and so the theater season was closed until the fall.

This full house of Booths would not last long at all, however.  Less than a month after this census record was taken, Edwin was married to his first wife, Mary Devlin.  The newlyweds honeymooned at Niagara Falls and then took up a home in New York.  By December of 1860, Asia wrote a letter to her friend Jean Anderson in which she mentions how Mary Ann, Rosalie and John Wilkes were no longer living at her home, having taken up residence at a boarding house elsewhere in Philadelphia.  Finally, Joseph Booth was enrolled in medical school in Charleston, South Carolina before the end of 1860.

As swiftly as they had all assembled, the Booths quickly separated again leaving us with only the above glimpse of a rare reunion among the entire family.

11 thoughts on “All Under One Roof”