The Son of John Wilkes Booth

At first blush, London may seem far removed from the story of the Lincoln assassination. However, the history of the assassin is very much based in his ancestral London roots. We can document that the Booth family had called London home since at least John Wilkes Booth’s great grandfather’s christening in London in 1723. Junius Brutus Booth, the patriarch of the theatrical dynasty that fathered the assassin, was born in and started his career on the London stages of Covent Garden and Drury Lane. A few years after the assassination, John Sleeper Clarke moved his family, including his wife and sister to the assassin, Asia Booth Clarke, to London. Asia never saw America again except for when her body was returned to Baltimore, and John Sleeper sleeps forever in a London cemetery.

So there are many possible Boothie missions for one to do when visiting London. You could find the location of Junius’ boyhood home, search through the London Metropolitan Archives for Booth birth and death certificates, or visit a theatre library to photograph early Junius playbills. There is also one small connection hidden away in a small cemetery.

hree children of Junius Brutus Booth are buried in London. The first to die, and is safely assumed to be buried in London, was Junius’ first child, Amelia. In my last post in the series regarding Junius’ early theatrical career I hinted about this unborn child conceived with Adelaide Delannoy. Amelia died in infancy and, thus far, an exact date of death and place of burial has yet to be found. The other two Booth children buried in London are Richard Booth, Junius’s other child with Adelaide who lived into adulthood, and Henry Byron Booth, Junius’ son with Mary Ann Holmes who died when the family was visiting London. A further post will document their deaths and burials once I receive paperwork in the mail from the London Metropolitan Archives.

While researching the above however, I came across an interesting letter in the James O. Hall Research Center of another Booth buried in London whose father had a familiar name:

Coincidences occur, of course, and there are likely hundreds of Booths in London today with no connection to the assassin of the President, but the fact that this Henry Wilkes Booth was buried in St. John’s of Clerkenwell, the same neighborhood where our Booth family resided, is worth following up. It appears that James O. Hall, forever investigating every lead, agreed and in another letter he recounts a time when he was in England and attempted to find the above mentioned stone. He was unsuccessful as, “the usual London rain” cut his search short.

The rain however, was probably a blessing as it turns out Mr. Hall was in the wrong cemetery. Just from my slight research into the matter I can tell you that London cemeteries are a nightmare. They are called different names at different times and many smaller cemeteries that existed during the Civil War era were transformed into parks with the grave stones removed. However, as luck would have it, one of the few gravestones that remain in one of those small micro parks is that of Henry Wilkes Booth’s: 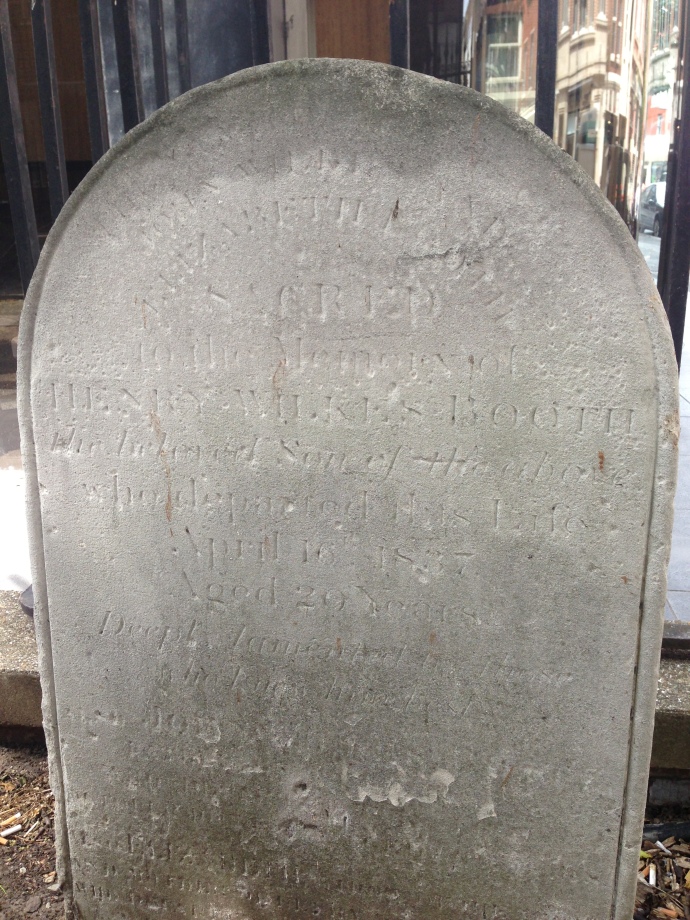 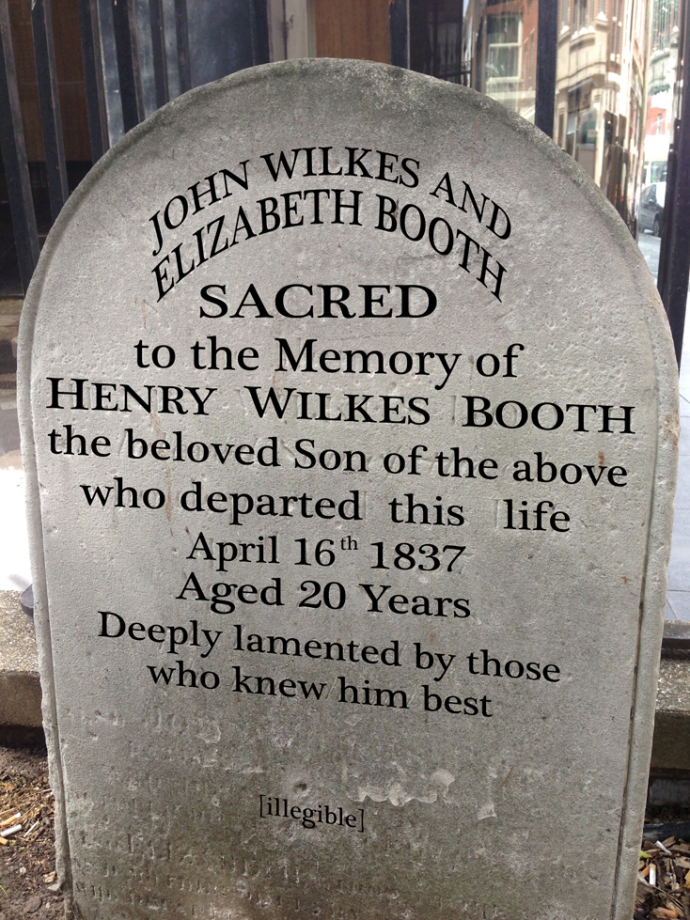 While it is entirely possible and seemingly appropriate that America loving Richard named his grandson John Wilkes Booth after the British agitator who sided with America during the revolution, the name had already been used in the family. The American Booths had contact with the British Booths and during Junius’ divorce proceedings with Adelaide, the British John Wilkes Booth was brought up as he controlled some of Junius’ assets that were left to him by his grandmother. Perhaps therefore, the assassin of President Lincoln was not named after the great radical John Wilkes, but after his father’s cousin, John Wilkes Booth of London.

Regardless, this one gravestone for Henry Wilkes Booth is one of the very few that remain of the illustrious Booth family in London. Today, it is one of five or so gravestones in the 320 square yard park “St. John’s Churchyard” off of St. John’s Street in London. 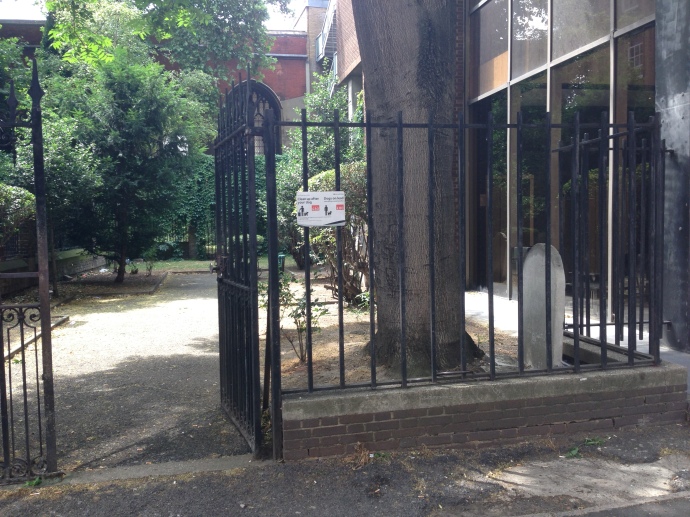 22 thoughts on “The Son of John Wilkes Booth”