Yesterday, April 20, marked the 188th anniversary of the debut of a new play on the American stage. Though practically forgotten today, the tragedy Ugolino debuted yesterday in 1825. The story is a dark one. The main character, Ugolino, is a passionate man who has lost all sense of reason due to his love for Angelica. When he finds that Angelica’s heart is desired by another man, the Marquis di Serassi, he kills this rival beau in a jealous rage. Overcome with madness, he slays his own beloved Angelica before regaining his senses. Ugolino, while clutching Angelica’s bleeding corpse to his chest, demands of the audience:

“Was it not well done? Look here! She loved me… and I killed her!”

While overwrought with his own grief and guilt, Ugolino is questioned by angry Venetians. “Accursed wretch,” they cry, “What moved thee to act?” Ugolino answers with:

“What mov’d me to it? To murder him who sacrificed my peace?

This was the crowning crime! This was Hell’s greatest triumph

…Dost thou not know me? Tis Despair

From the abyss of ever-burning Hell,

Where on the footstool of the great fiend’s throne,

I sit and form dark snares for wavering souls!”

Ugolino, in his final scene of this bloody drama, steps forward, his sword upraised, ready to plunge the blade into his chest, and shrieks, “Come my bride…to Hell’s center! In my heart I plunge this reeking sword!” The play ends with Ugolino’s suicide.

The original debut on April 20, 1825 was at Philadelphia’s Arch Street Theatre and was a benefit for Mr. Henry Wallack, with him and his wife playing Ugolino and Angelica.

Of the play, one critic wrote:

“Ugolino,” [is] one of the best productions of the modern stage, a work possessing great poetry of diction and nervousness of style… This play is published, easily accessible, and worthy a place in every library.”

Though celebrated by some, Ugolino did not become a house hold name. From its initial April 20, 1825 debut onward, it was produced quite sparingly. In the years that followed, the actor John Randolph Scott seemed to be the only one who made it part of his repertoire. 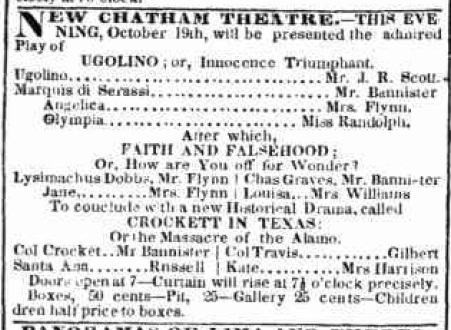 It was performed by Scott at the Bowery Theatre and Chatham Theatre in New York City. When J. R. Scott died in 1856, the play saw even less exposure.

Therefore when the young tragedian John Wilkes Booth decided to use Ugolino as his benefit piece for the end of his Boston Museum run in March of 1864, you can understand why this Boston Daily Evening reporter had never heard of it:

John Wilkes was not the first Booth to perform in Ugolino. In December of 1849, Clementine DeBar Booth, the first wife of Junius Brutus Booth, Jr., performed the play alongside J. R. Scott at Howard’s Athenaeum in Boston.

While John Wilkes did choose to perform Ugolino as a benefit due to a family connection, it was not this coincidental connection to his former sister-in-law. Rather, John Wilkes Booth decided to perform the little known play Ugolino because of his connection to the playwright. Ugolino was written by his father, Junius Brutus Booth, Sr. 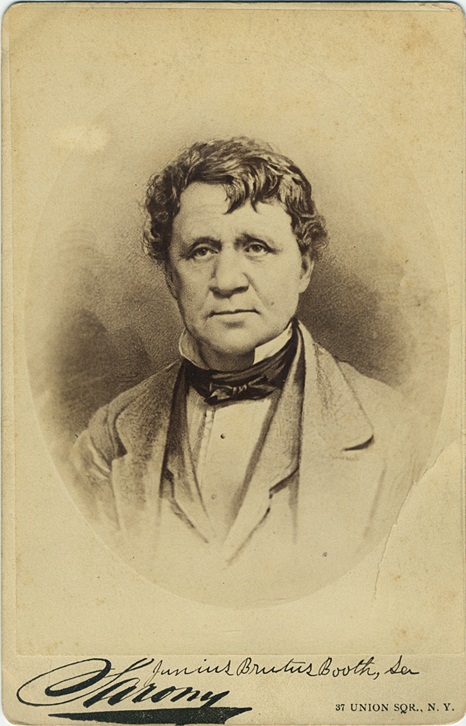 Ugolino is believed to be the only play that Junius Brutus Booth, arguably the best tragedian of his generation, ever wrote. What’s more, I have yet to find any source saying that Junius performed in or even had a chance to see his own work on stage. When Wallack put it on as a benefit in Philadelphia in 1825, Junius was performing in Baltimore. When Junius’ friend J. R. Scott was reviving it in New York during September of 1834, Junius was himself busy performing elsewhere. If Junius had the chance to attend one of the rare dramatizations of his work, it does not appear to be documented.

Despite the positive critiques of the play, I think it is safe to say that those reviewing Ugolino were more in awe of its creator than his product. In her book, My Thoughts Be Bloody, author Nora Titone describes Ugolino as a “blood bath”. Junius Brutus Booth’s biographer, Stephen Archer, stated that Ugolino, “was in the flamboyant tradition of the times,” but, “failed to win a lasting place on American stages.”

Despite its violence and bloodshed however, Junius Brutus Booth’s masterpiece still contains some touchingly poetic lines:

As Fortune or as Fancy leads the way,

Far off, yet not forgotten, though apart,

Dwelling together in each other’s heart.”

Though time robs us of experiencing Junius Brutus Booth’s true theatrical gifts first hand, these few lines are a fitting self-epitaph to his effect on theatre history.