While researching for my last post about George Atzerodt’s burial, I came across an interesting character by the name of Louis Schade.  Mr. Schade happened to make his way into the Lincoln assassination realm in a couple of ways.

Louis F. Schade was a born in1829 in Berlin, Germany.  He studied law at the University of Berlin.  As a student, he took an active part in the failed unification of the German states known as the Revolution of 1848.  He fled to America shortly thereafter.  In 1855, Schade found himself in Chicago under the employ of Senator Stephen A. Douglas.  Schade not only visited German districts in Illinois making speeches in support of Douglas, but also became the editor of two of Douglas’ papers, “The National German Democrat” and “The National Union”.  He was admitted to the bar, becoming a certified lawyer in 1858.  After Douglas won the Illinois state Senate seat against his opponent, Abraham Lincoln, Schade returned to Washington, D.C. and practiced law.  A large client of his was the United States Brewer’s Association and Schade became an outspoken advocate against the temperance movement.  He gained nation-wide fame, however, in 1865, when he agreed to represent Captain Henry Wirz, commander of the Andersonville prison.  Schade would come to truly believe in his client’s innocence and even after Wirz’ execution, he would write publicly about the tragedy.  A few years later he would not only lament the injustice of Wirz’s execution, but the treatment of his body:

Come February of 1869, when President Andrew Johnson is evoking his presidential privilege of writing pardons without fear of political reprisals, Schade applies for the body of Henry Wirz.  It is granted and Schade arranges for his late client to be buried in Mount Olivet cemetery in D.C.  In a twist of fate, Mary Surratt would be buried here too, reuniting the pair yet again.

But the body of Henry Wirz was not the only one Louis Schade helped removed from the Arsenal grounds.  On behalf of another client, Victoria Atzerodt, Schade wrote to Andrew Johnson asking for George’s body.  He wrote in part that, “the present enlightened age…will not permit the mediaeval and barbaric custom of seeking revenge on a handful of dust and ashes.”  In addition to Schade’s appeal, John Atzerodt wrote his own letter to President Johnson asking for George’s body:

A few days later, Louis Schade and John Atzerodt would visit Andrew Johnson in person to receive the signed order for George’s remains: 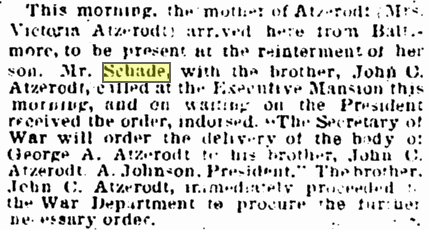 So, Schade helped to rebury two executed criminals from the grounds of the Old Arsenal prison.  Louis Schade’s connection to Lincoln’s assassination does not end there, however.

On October 18, 1871, a recent widow in Washington, D.C., passed away.  Her husband had died only a few months earlier of a laudanum overdose.  The pair had left their children without a will.  To raise money, the heirs of the family sold some of the furniture in the house.  A bureau, gas jet, rocking chair, an engraving, and a bed were all sold at auction.  The family was able to retain possession of the house where they had lived, though.  It was a three story brick row house in downtown D.C.  But it was also much more than that.  It was the house where Abraham Lincoln had died, also called the Petersen House after the family that built and owned it.

The Petersen House circa 1883

By 1878, the Petersen heirs decided it was time to sell the house.  Return Louis Schade.  By this time, Schade had reignited his skills as a newspaper editor and had started his own paper, The Washington Sentinel.  It was a Democratic paper that Schade used as an outlet for his own views.  He devoted a whole back page to beer advertisements to support his client, the Brewer’s Association.  As a German immigrant he wrote largely in support of more lenient immigration policies.  The Sentinel also contained a great deal of international coverage for a paper its size.  Schade was a successful editor and lawyer in 1878, and the Petersens probably had no problem selling their shrine of a house to him.  On November 25, 1878 Schade and his wife bought the Petersen house for $4,500, a little over $100,000 in today’s currency.

The Schade family would enjoy living at the Petersen house, at first.  Louis moved the office of his newspaper to the front of the basement.  The room where Lincoln died became a playroom for the children:

Eventually though, the Schades would tire of the many visitors that wished to gain entry into their historic home.  By 1893, the family had moved out of the house and leased it to the Memorial Association of D.C.  The association invited a tenant named Osborn Oldroyd to live in and showcase his extensive Lincoln collection inside the Petersen house.  Finally, on June 29th, 1896, the federal government purchased the Petersen House from Louis Schade for $30,000.  That is equivalent to over $775,000 in today’s money.  Louis Schade definitely made a tidy profit on his historic investment.

The noted editor and lawyer, Louis Frederick Schade died on February 25th, 1903.  He is buried in D.C.’s Prospect Hill Cemetery.  Prospect Hill, a largely German cemetery, is located right next to Glenwood Cemetery, the proposed yet abandoned burial location for George Atzerodt.

Louis Schade gained notoriety for his defense of Henry Wirz and his long career as a newspaper editor.  Yet he also managed to entwine himself in the epilogue of Lincoln’s assassination.  He helped to bury a conspirator and bought the house where Lincoln died.  He remains a minor, yet interesting side figure in history.

References:
Newspaper article abstracts were retrieved from GenealogyBank.com
William A. Petersen House – House Where Lincoln Died Historic Structure Report by the National Park Service
They Have Killed Papa Dead by Anthony Pitch
The Papers of Andrew Johnson: September 1868 – April 1869
Andrew Johnson: A Biographical Companion by Glenna Schroeder-Lein
Washington Sentinel by the Library of Congress
There are wonderful pictures of Louis Schade on his FindAGrave page.